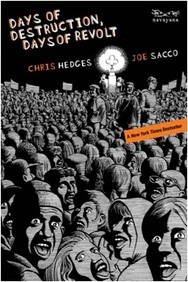 Black and white truth has little place in the slippery grey of liberal opinion. Poverty porn or slum tourism are easy dismissals of writing on the human fallout of consumer capitalism. And plenty of people make a fetish of poverty for personal or political gain. But some artists bring the dying places of the world to life in their work with such searing conviction that it burns through the smog. Like cartoonist and journalist Joe Sacco, whose work is a reminder that moral uncertainty is all too often a veil of self-deception – that if looking at poverty can be exploitative, we’re still not justified in averting our eyes.

If in urban India we’re quite used to looking away from our own inequalities, oppression in the US is practically a sight unseen by the rest of the world. The new South Asian edition of Days of Destruction, Days of Revolt, a 2012 collaboration between Sacco and Pulitzer-winning journalist Chris Hedges, could change that. Published by Delhi’s Navayana, which engages with caste and other forms of inequality, the book reports on the American communities hard-hit by globalisation, the so-called “sacrifice zones” of unchecked capitalism. The book is split into five chapters, four of which consist mostly of Hedges’ written reportage from America’s deepest circles of hell: the Native American reservation of Pine Ridge, South Dakota; the violent city of Camden, New Jersey; Welch, in an area of West Virginia devastated by coal mining; and Immokalee, Florida, an agricultural region reliant on undocumented immigrant labour. Sacco’s illustrations are interspersed: sound-bite portraits and a few short story-length histories of representative individuals.

The stories are relentlessly horrific. There’s senseless murder, forced prostitution, alcoholism, pill addiction, obesity, homelessness, genocide fuelled by suicide, and more grit than some readers might be able to stomach. “Take a look at the American dream,” says the manager of a tent town in Camden. “In today’s society, no one is exempt… Everybody is one paycheck away from being here.” 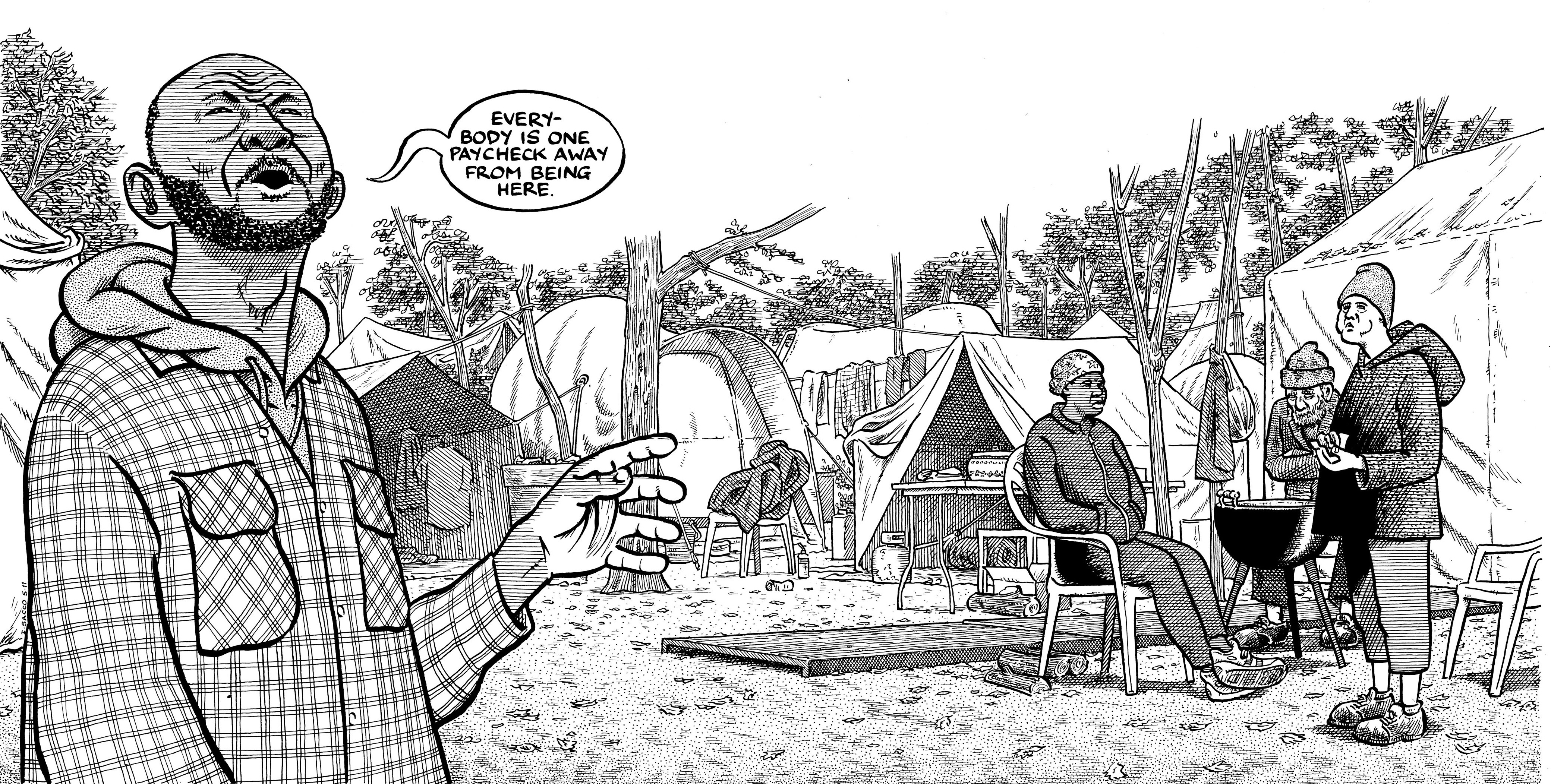 Both Sacco and Hedges let such characters do a lot of the talking, but Hedges is also an opinionated presence in these pages and he makes no apologies for it. At times he gets almost biblical, which might invigorate or irritate, depending on the reader. “To stand on the sidelines and say ‘I am innocent’ is to bear the mark of Cain,” Hedges proclaims.

Founding editor of Navayana, S Anand is a believer. “This charge of being biased and pedantic… frankly it is tiresome,” he wrote over email. “The crisis they [Hedges and Sacco] are documenting is vulgar. The hard-hitting documentary style is effective.” Anand and Sacco had been on each other’s radars even before the latter blurbed Bhimayana: Experiences of Untouchability, a graphic novel inspired by Ambedkar’s life and illustrated by two Pardhan-Gond artists. (Sacco also addressed caste in his reporting from Kushinagar, Uttar Pradesh.) The cartoonist was instrumental in getting Navayana the South Asian rights.

The edition, Anand said, is aimed at English-speaking upper and middle class members who believe in “following the American model… a blind imitation of a crass consumerist capitalistic ethic”. And while it complicates the idea of America, the bookinevitably stirs up comparisons between poverty in “developed” versus “developing” nations.

“One of the key reasons I did this book is to try and create a template for similar books in India,” said Anand, who, besides cowriting Bhimayana, also published A Gardener in the Wasteland, a graphic interpretation of Jotiba Phule’s Gulamgiri. “I want to publish such a book on Koodankulam for instance, a sacrifice zone in the making,” he said. “There’s no dearth of issues; there’s a dearth of writers and artists. Sadly, in India, the graphic novel form is considered merely cool, quirky, fashionable. It’s like a boys’ club. That [it] can be political is granted, but is rarely attempted.”

Days of Destruction… isn’t perfect – some of the academic interludes sit awkwardly within personal narratives; occasionally there are abrupt switches from one character to another, past to present or fact to opinion. What Hedges is especially good at, though, is underscoring how downtrodden people turn against each other, and how oppressors encourage this to their advantage.

In the spirit of Howard Zinn’s A People’s History of the United States, Hedges and Sacco are also good at looking for resistance. These “bright spots” range from union history to community organising groups such as the Coalition of Immokalee Workers, to intelligent, outspoken individuals who defy the stereotype of hapless sacrificial victims. The final chapter is devoted to the Occupy movement, which the authors see as evidence that discontent with capitalism is spreading to those who are well-placed to protest it. Whatever Occupy’s potential to inspire revolt may be; the chapter is a valuable, clear-eyed, insider dissection of the movement. Anand pointed out that “many of the poor in India have no choice but to ‘occupy’ or squat. These acts are not seen, unfortunately, as political… Only when the middle class of the US, mostly whites, staged Occupy did it become newsworthy.” Still, Occupy is an important example for elites anywhere whose sense of justice can often outpace a willingness to acknowledge, as Anand put it, “their endorsement of a capitalistic ethic; their own culpability through consumption”. And in an age of global industry, creating links between oppression and revolt in different parts of the world is an important endeavor in itself. Cutting through the smokescreen of “neutral” reporting, Days of Destruction… is a reminder that “Any act of rebellion keeps alive the embers… It passes on another narrative.” And radical dissent can start as simply as exercising one’s right to unselfish action.