In Abraham Verghese’s debut novel, fate is stitched together with sutures ♦ 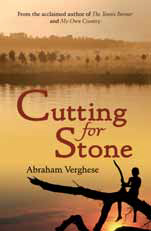 Abraham Verghese is a man of science and fact. His experiences as a doctor in small-town Tennessee in the mid-1980s during the early years of the AIDS epidemic led to his first book, the well-received My Own Country: A Doctor’s Story.  After a flurry of articles and short stories on the medical profession for magazines like The New Yorker and Texas Monthly, Verghese followed up in 1998 with The Tennis Partner. It was another non-fiction book and sketched the agonies of a colleague’s battle with drug addiction.

Despite his extensive track record of chronicling real events, Verghese’s regular readers won’t be surprised to find that his third book, Cutting for Stone, is a novel. After all, he’s often written of his interest in narrative medicine, a new discipline that gets patients to tell stories about themselves and uses literature as a form of therapy. Verghese has long savoured the paradox implicit in make-believe tales. “Fiction is the great lie that tells the whole truth about how the world really lives,” Verghese said in an email interview with Time Out, quoting author Dorothy Allison.

Cutting for Stone, on which Verghese has been working for nearly a decade, draws much from his personal and professional experiences on three continents. The main characters are doctors and the book, set largely in Ethiopia,  follows its author’s geographical and professional trajectory. Verghese, 53, is a Syrian Christian who was born in  Africa, but returned to India to study medicine – a profession that eventually took him to the US.

His journey, like the journey of hundreds of other Malayali Christians, is the result of a quirk of fate that, had it not been true, would have seemed quite implausible. It was the product of a state visit to India by the Ethiopian Emperor Haile Selassie in 1956. “As the head of an old Christian nation, he was interested in seeing the churches of Saint Thomas in Kerala,” said Verghese. “Apparently he was so impressed by the sight of all these school kids in uniform clogging the roads that he hired all his teachers for the schools he was building from this one state.”

Soon after, there was such a sizeable community of Malayalis in Ethiopia, they even had their own church service. Verghese’s parents met in Addis Ababa and Verghese lived in Ethiopia, and started medical school there. But a military coup in 1974 that deposed the emperor disrupted his plans – and threw the Ethiopian Malayalis into disarray. “I was told that as an ‘expatriate’, I should leave,” Verghese said. “I had never heard that term before. What it meant was that I didn’t really belong, even though I thought I did.” Verghese casts his expulsion from his childhood Eden in a positive light, despite the fact that “obviously there is more than a little nostalgia”. Though he still thinks of Ethiopia as his homeland, Verghese – who now lives in California – said that for him, “home is really a state of mind… It’s the place where you are wanted and needed.”

The sense that people – not a place – are ultimately responsible for creating home bubbles through Cutting for Stone.  Though the novel draws from his own migratory experience, Cutting for Stone is no memoir. “When I actually sat  down to write this book, what kept recurring was an image of a beautiful South Indian nun who suddenly and  precipitously goes into labour in a mission hospital in Africa,” Verghese said. “That act of her going into labour throws  everyone for a loop.” The narrator, Marion Praise Stone, is one of a set of originally conjoined twins born to this nun, a  nurse at “Missing” (Mission) Hospital, near Addis Ababa.  Verghese skilfully weaves a world around the hospital and its staff: the twin’s biological parents, Sister Mary Joseph Praise and brilliant British surgeon Thomas Stone; and their adoptive parents, ob/gyn Hemlatha and general practitioner Dr Ghosh. Inevitably, the brothers’ destiny is bound up with medicine. Both become surgeons.

The most moving passages in Cutting for Stone are Marion’s visceral descriptions of surgical operations. This took some research because Verghese himself specialises in internal medicine and pulmonary and infectious diseases. “I  hope the reader will enjoy the technical passages, much as I enjoy learning about other occupations in the course of a novel,” he said.

Besides the surgical motifs, though, Cutting for Stone encompasses a larger theme that is much closer to the heart of Verghese’s own medical interests. He is currently the Professor for the Theory and Practice of Medicine at Stanford’s School of Medicine and – ever since the experiences that inspired My Own Country – has been an advocate of what is called “bedside medicine”. Verghese is known for making clinical rounds with students to see how much can be determined from a simple physical exam, a routine he feels has been sidelined in modern medicine. “One of my pet peeves is over-reliance on science and technology at the expense of a caring doctor-patient relationship,” he said. “There’s a subtext in our interaction with physicians where we also want them to say, ‘Don’t worry, it’ll be alright.’ One of the things I hope this book does is to portray that very well. This profession is a ministry of healing, it is a calling, and that sense has become greatly threatened.” The contrast is evident in the physician-patient relationships at Missing Hospital, where “the news to convey… was that you’d kept death at bay.” But in hospitals in the US “there is an expectation that medicine will provide a cure, mandate a cure”, Verghese said.

Another recurring theme is the description of medical textbooks – both real and imagined –as literary works. “In the  pre-internet era, [medical textbooks] were like mentors we carried around, they had a voice that we admired and  found to be unique,” Verghese said. For example, Dr Ghosh performs his first operation with the sing-song  instructions from a rhyming book of surgery echoing in his head. Verghese clearly sees medicine as a confluence of the  hard edge of science and the passion of art. “I wanted to write about the sense a young boy has of the wonder of  medicine and how it’s some secret ritual that if you could only learn it, would be like buying X-ray spectacles and suddenly you could see through people,” he said. “I did want the college age reader who is embarking on a career to  realise that the house of medicine is huge and has room for everyone, and that inherently medicine is a human pursuit,  a calling in which one must believe in the Samaritan function of being a physician.”