An American architect in Delhi ♦ 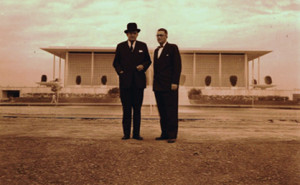 Some of Delhi’s most beautiful buildings sit on foreign soil. In Chanakyapuri, the American Embassy’s Chancery and Ambassador’s residence are two of independent India’s oldest diplomatic buildings – and arguably the most successful at blending modern minimalism with motifs from Mughal and British architecture. Architect Edward Durell Stone, who had already co-designed the Museum of Modern Art in New York City, completed the Chancery in 1959. The Ambassador’s residence, called Roosevelt House, opened in 1963.

The complex was much admired in the West, garnering a Time magazine feature and the praise of Frank Lloyd Wright, who called it “a perfectly beautiful building”. The Delhi buildings were especially celebrated because they were the first to implement a new American diplomatic policy of building foreign missions in a culturally sensitive manner. After a trip to Agra, Stone was inspired by the Taj Mahal, and drew on Indian elements to design a climate-sensitive building. A roof canopy above the top-floor ceiling dissipates the heat, and there was extensive jali-work in the residence, which became climbing walls for Ambassador John Kenneth Galbraith and his sons in the ’60s. It became a tradition for guests, including Jackie Onassis Kennedy, to step across the water garden in the Chancery’s central courtyard. Once, a visiting US Colonel marched straight into the pond.

The building contracts went to Mohan Singh and his sons, who would later extend American influence in Delhi by partnering with Coca Cola when it arrived here. Stone formed long-lasting friendships with the Singh family: Stone’s son Hicks told us that the Singhs nicknamed the building the “Taj Maria”, after Edward’s new wife, who had helped him through a low point in his career just before the Embassy project. Besides being the backdrop for 50 years of diplomacy between Delhi and Washington, DC, the Embassy buildings had a far-reaching architectural impact. Stone took the same ideas and spun them into landmark buildings in the US, notably the John F Kennedy Center for the Performing Arts, back in the American capital.

Watch a newsreel of the inauguration of the US Embassy in New Delhi: