A Conversation With: Literary Critic and Novelist Shamsur Rahman Faruqi ♦ 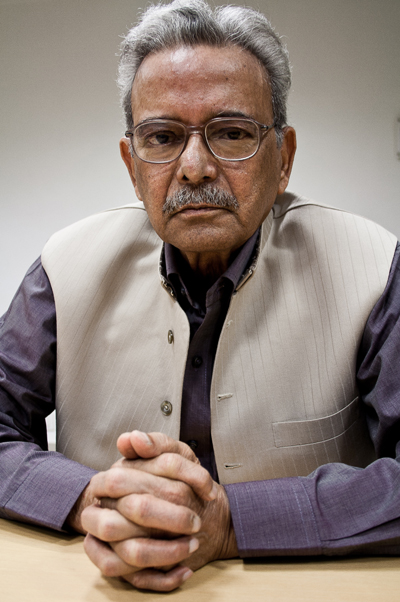 India’s literary establishment is abuzz about the recently published novel “The Mirror of Beauty,” a 984-page fictional account about the life and times of Wazir Khanam, the mother of the famed Urdu poet Daag Dehalvi, set mostly in Delhi and its environs during the 19th century. A beautiful and spirited woman, Wazir mingles with the noblemen of the Mughal court of Emperor Bahadur Shah Zafar, the English officers of the East India Company, the poets of the age and a whole panorama of other unforgettable characters.

“The Mirror of Beauty” is a translation of the original 2006 Urdu-language novel “Ka’i Chand The Sar-e-Aasmaan” by its author, Shamsur Rahman Faruqi. Mr. Faruqi, 78, who retired as a top bureaucrat in the Indian Postal Service, is a leading figure of Urdu literary criticism. He spoke to India Ink in Delhi about how he created the world of 19th century Delhi for “The Mirror of Beauty” and what he hopes young readers will get out of the book.

You live in Allahabad, a relatively smaller city, and your work has mostly been read by those within the Urdu-speaking or academic world. Suddenly you have a celebrity author like Orhan Pamuk calling your book “an erudite, amazing historical novel.” What’s it been like to step into the global literary spotlight?
I feel uncertain about all this. I am not sure that I really deserve all this attention, all this lionizing. I told my editor that I feel small, knowing that you guys are building me up so much, like a colossus. I am now long past those things. I have faced so much criticism in my life, from my own people, and also I have earned praise, love and appreciation. It makes no difference to me whether it is the global environment or the backwater of Allahabad. If Orhan Pamuk writes well about me, I’m happy; if he didn’t write well, I wouldn’t mind.

Writers in English can usually assume a global readership. Though Urdu was a lingua franca, at least in India, 150 years ago, its contemporary literature has a more specific audience. How did the shift in audience affect your translation?
The novel is slightly longer than the Urdu version, because I had to explain certain things. And of course translating two lines of verse in Urdu might expand to four or five lines in English. One theory of translation is that it is worthless unless it sounds like translation. I really don’t agree with that at all, because when you are transferring a certain kind of cultural code and symbolism, which is so utterly alien, it is unfair on the reader to make her feel, all the time, that “yes, I am reading something in high Urdu in the English form.” Like some English woman wearing Indian dress.

How did you go about researching and reinventing the worlds of 19th century Delhi — from the descriptions of carpet-weaving to courtly etiquette?
I didn’t do any systematic, formal research. As I wrote, I did consult a few books when I needed to verify some particular detail, dates mostly. It would not be an exaggeration to say that the novel had always existed in my head as an amorphous, identity-less entity. Facts, memories, impressions — and of course my reading before I’d began to compose the novel — it was all there — a chaos, especially because I didn’t have anything like an idea to write a novel with Wazir Khanam as the chief character.

Of course, I was incomparably enriched by my love for pre-modern Persian and Urdu poetry. Later, what went into my unconscious, more than I realized, was my reading of the Dastan of Amir Hamza, a series of loosely linked oral romances whose 46 volumes and 42,000-plus pages and more than 20 million words I read, and in some cases reread, since about 1980. I’ll always remain obliged to Frances Pritchett [professor emerita at Columbia University] who directed my attention to the Dastan.

For both Urdu and English novels, you restricted yourself to words from the 19th-century lexicon. “The Mirror of Beauty” is very readable, but is the original book a challenge for native Urdu speakers?.
People have been admiring it for sheer size and expanse, but everybody has complained: you didn’t give a glossary, you should have given the Farsi [Persian] in translation. Even in Pakistan, people complained. Not that it was not popular – it went through two editions in four years or so, which is somewhat remarkable for an Urdu novel. I made it the way it is quite consciously, writing in a register which is no longer spoken — archaic Urdu which is unfamiliar to most people. I didn’t care. I was doing my thing. I had to be faithful to my own vision.

There’s a strong rapport between Indian and Pakistani authors writing in English – they review each other’s books, travel to each other’s festivals, make the same award lists. What about Indian and Pakistani writers in Urdu?
On a personal level, there is a lot of friendliness, a lot of coming and going and writing and reading, but it’s not wholehearted promotion. I can promote a Pakistani writer or book wholeheartedly, but the Pakistani literary establishment is reluctant to promote Indian writers so strongly. Almost every important writer who died in Pakistan or is taken as a Pakistani now – take Faiz [Ahmad Faiz], Rashid, [Saadat Hasan] Manto – everybody has written about them in India. You can’t find a comparative example [in Pakistan]. Otherwise, they are extremely cordial; they will feed you, they will wine you, they will dine you.

You’ve mentioned your interest in the historical fiction of A.S. Byatt and Peter Ackroyd, among others. Are there any fictionalizations of India, particularly its Mughal history, that you looked at?
In English, Amitav Ghosh’s novels, which I have read and admired: “Sea of Poppies,” followed by “River of Smoke.” A lot of history has gone into them, although it is a history of a very narrow area, that is Bengal of the early 19th or late 18th century, particularly the opium trade. He certainly has full grasp on the material.

You’ve suggested that you wrote “The Mirror of Beauty” not just as a pleasant trip back through time. Could you talk a bit more about that?
I was hoping that if young people read this book, they will learn more about themselves – where they came from, how they were formed — the pain of separation, of discontinuity [from] what the world was before 1857. Though it was already crumbling, they had a world which was self-conscious, which was sure of its self-worth, which could match with any other culture or any other society anywhere – but for the adverse information and propaganda handed out to us by our colonial master.

In any case, every past is worth revisiting, even if it is the dirtiest possible past. But this past is not dirty. This past is honorable. And this past is more literate, more cultured, more sophisticated than today’s present. I am hoping people who take the trouble of reading it will find it an easy book to read, in the sense that the story goes along and keeps you interested, and ultimately they will know where they came from, what they were.