The last century of Mughal rule comes to life in The Mirror of Beauty, Shamsur Rahman Faruqi’s compelling picture of Delhi and its wider world ♦ 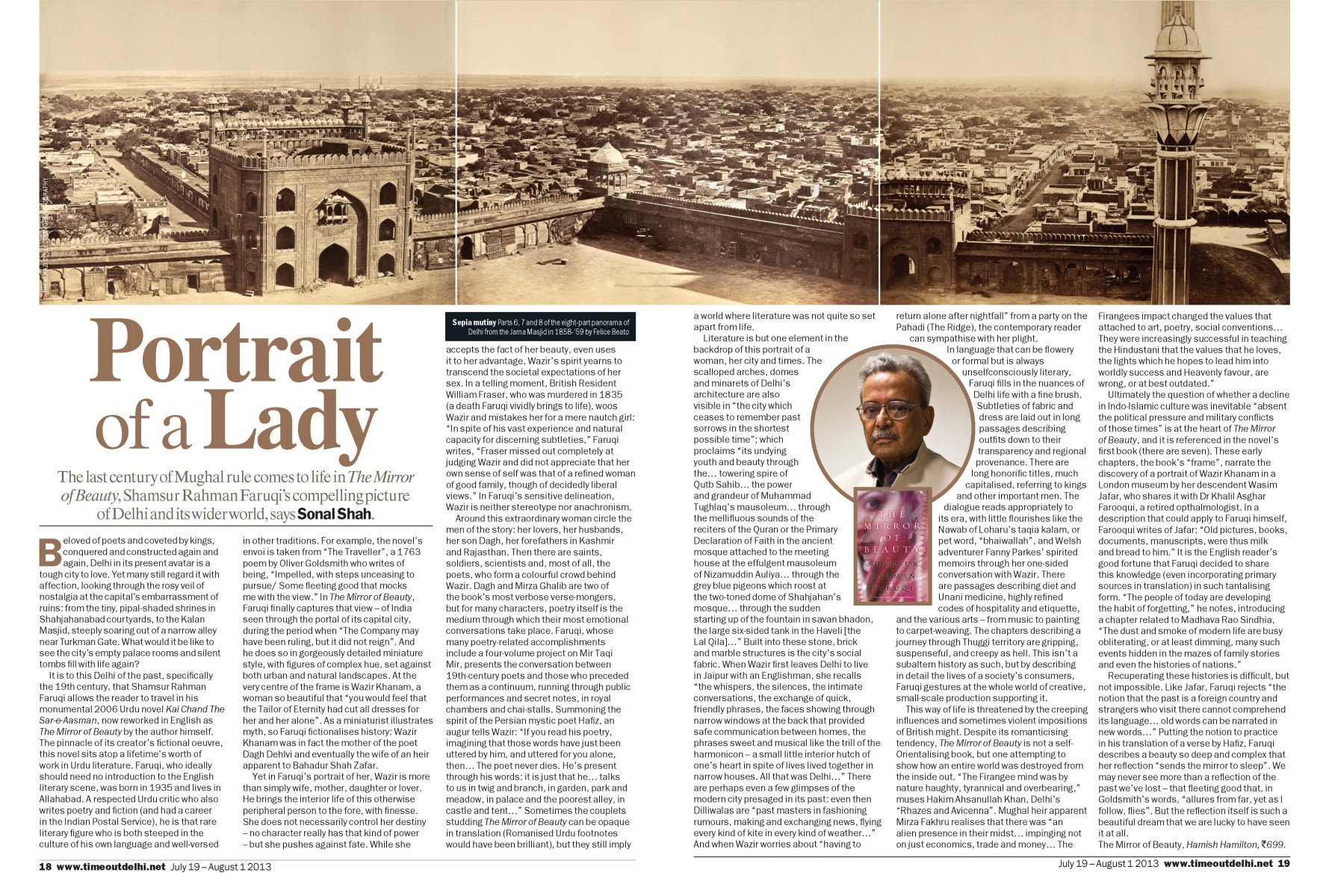 Beloved of poets and coveted by kings, conquered and constructed again and again, Delhi in its present avatar is a tough city to love. Yet many still regard it with affection, looking through the rosy veil of nostalgia at the capital’s embarrassment of ruins: from the tiny, pipal-shaded shrines in Shahjahanabad courtyards, to the Kalan Masjid, steeply soaring out of a narrow alley near Turkman Gate. What would it be like to see the city’s empty palace rooms and silent tombs fill with life again?

It is to this Delhi of the past, specifically the 19th century, that Shamsur Rahman Faruqi allows the reader to travel in his monumental 2006 Urdu novel Kai Chand The Sar-e-Aasman, now reworked in English as The Mirror of Beauty by the author himself. The pinnacle of its creator’s fictional oeuvre, this novel sits atop a lifetime’s worth of work in Urdu literature. Faruqi, who ideally should need no introduction to the English literary scene, was born in 1935 and lives in Allahabad. A respected Urdu critic who also writes poetry and fiction (and had a career in the Indian Postal Service), he is that rare literary figure who is both steeped in the culture of his own language and well-versed in other traditions. For example, the novel’s envoi is taken from “The Traveller”, a 1763 poem by Oliver Goldsmith who writes of being, “Impelled, with steps unceasing to pursue/ Some fleeting good that mocks me with the view.” In The Mirror of Beauty, Faruqi finally captures that view – of India seen through the portal of its capital city, during the period when “The Company may have been ruling, but it did not reign”. And he does so in gorgeously detailed miniature style, with figures of complex hue, set against both urban and natural landscapes. At the very centre of the frame is Wazir Khanam, a woman so beautiful that “you would feel that the Tailor of Eternity had cut all dresses for her and her alone”. As a miniaturist illustrates myth, so Faruqi fictionalises history: Wazir Khanam was in fact the mother of the poet Dagh Dehlvi and eventually the wife of an heir apparent to Bahadur Shah Zafar. 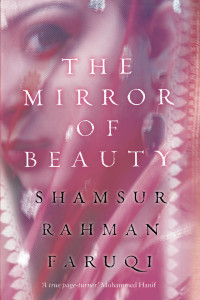 Yet in Faruqi’s portrait of her, Wazir is more than simply wife, mother, daughter or lover. He brings the interior life of this otherwise peripheral person to the fore, with finesse. She does not necessarily control her destiny – no character really has that kind of power – but she pushes against fate. While she accepts the fact of her beauty, even uses it to her advantage, Wazir’s spirit yearns to transcend the societal expectations of her sex. In a telling moment, British Resident William Fraser, who was murdered in 1835 (a death Faruqi vividly brings to life), woos Wazir and mistakes her for a mere nautch girl: “In spite of his vast experience and natural capacity for discerning subtleties,” Faruqi writes, “Fraser missed out completely at judging Wazir and did not appreciate that her own sense of self was that of a refined woman of good family, though of decidedly liberal views.” In Faruqi’s sensitive delineation, Wazir is neither stereotype nor anachronism.

Around this extraordinary woman circle the men of the story: her lovers, her husbands, her son Dagh, her forefathers in Kashmir and Rajasthan. Then there are saints, soldiers, scientists and, most of all, the poets, who form a colourful crowd behind Wazir. Dagh and Mirza Ghalib are two of the book’s most verbose verse-mongers, but for many characters, poetry itself is the medium through which their most emotional conversations take place. Faruqi, whose many poetry-related accomplishments include a four-volume project on Mir Taqi Mir, presents the conversation between 19th-century poets and those who preceded them as a continuum, running through public performances and secret notes, in royal chambers and chai-stalls. Summoning the spirit of the Persian mystic poet Hafiz, an augur tells Wazir: “If you read his poetry, imagining that those words have just been uttered by him, and uttered for you alone, then… The poet never dies. He’s present through his words: it is just that he… talks to us in twig and branch, in garden, park and meadow, in palace and the poorest alley, in castle and tent…” Sometimes the couplets studding The Mirror of Beauty can be opaque in translation (Romanised Urdu footnotes would have been brilliant), but they still imply a world where literature was not quite so set apart from life.

Literature is but one element in the backdrop of this portrait of a woman, her city and times. The scalloped arches, domes and minarets of Delhi’s architecture are also visible in “the city which ceases to remember past sorrows in the shortest possible time”; which proclaims “its undying youth and beauty through the… towering spire of Qutb Sahib… the power and grandeur of Muhammad Tughlaq’s mausoleum… through the mellifluous sounds of the reciters of the Quran or the Primary Declaration of Faith in the ancient mosque attached to the meeting house at the effulgent mausoleum of Nizamuddin Auliya… through the grey blue pigeons which roost at the two-toned dome of Shahjahan’s mosque… through the sudden starting up of the fountain in savan bhadon, the large six-sided tank in the Haveli [the Lal Qila]…” Built into these stone, brick and marble structures is the city’s social fabric. When Wazir first leaves Delhi to live in Jaipur with an Englishman, she recalls “the whispers, the silences, the intimate conversations, the exchange of quick, friendly phrases, the faces showing through narrow windows at the back that provided safe communication between homes, the phrases sweet and musical like the trill of the harmonicon – a small little interior hutch of one’s heart in spite of lives lived together in narrow houses. All that was Delhi…” There are perhaps even a few glimpses of the modern city presaged in its past: even then Dilliwalas are “past masters in fashioning rumours, making and exchanging news, flying every kind of kite in every kind of weather…” And when Wazir worries about “having to return alone after nightfall” from a party on the Pahadi (The Ridge), the contemporary reader can sympathise with her plight.

In language that can be flowery or formal but is always unselfconsciously literary, Faruqi fills in the nuances of Delhi life with a fine brush. Subtleties of fabric and dress are laid out in long passages describing outfits down to their transparency and regional provenance. There are long honorific titles, much capitalised, referring to kings and other important men. The dialogue reads appropriately to its era, with little flourishes like the Nawab of Loharu’s taqia kalam, or pet word, “bhaiwallah”, and Welsh adventurer Fanny Parkes’ spirited memoirs through her one-sided conversation with Wazir. There are passages describing diet and Unani medicine, highly refined codes of hospitality and etiquette, and the various arts – from music to painting to carpet-weaving. The chapters describing a journey through Thuggi territory are gripping, suspenseful, and creepy as hell. This isn’t a subaltern history as such, but by describing in detail the lives of a society’s consumers, Faruqi gestures at the whole world of creative, small-scale production supporting it.

This way of life is threatened by the creeping influences and sometimes violent impositions of British might. Despite its romanticising tendency, The Mirror of Beauty is not a self-Orientalising book, but one attempting to show how an entire world was destroyed from the inside out. “The Firangee mind was by nature haughty, tyrannical and overbearing,” muses Hakim Ahsanullah Khan, Delhi’s “Rhazes and Avicenna”. Mughal heir apparent Mirza Fakhru realises that there was “an alien presence in their midst… impinging not on just economics, trade and money… The Firangees impact changed the values that attached to art, poetry, social conventions… They were increasingly successful in teaching the Hindustani that the values that he loves, the lights which he hopes to lead him into worldly success and Heavenly favour, are wrong, or at best outdated.”

Ultimately the question of whether a decline in Indo-Islamic culture was inevitable “absent the political pressure and military conflicts of those times” is at the heart of The Mirror of Beauty, and it is referenced in the novel’s first book (there are seven). These early chapters, the book’s “frame”, narrate the discovery of a portrait of Wazir Khanam in a London museum by her descendent Wasim Jafar, who shares it with Dr Khalil Asghar Farooqui, a retired opthalmologist. In a description that could apply to Faruqi himself, Farooqui writes of Jafar: “Old pictures, books, documents, manuscripts, were thus milk and bread to him.” It is the English reader’s good fortune that Faruqi decided to share this knowledge (even incorporating primary sources in translation) in such tantalising form. “The people of today are developing the habit of forgetting,” he notes, introducing a chapter related to Madhava Rao Sindhia, “The dust and smoke of modern life are busy obliterating, or at least dimming, many such events hidden in the mazes of family stories and even the histories of nations.”

Recuperating these histories is difficult, but not impossible. Like Jafar, Faruqi rejects “the notion that the past is a foreign country and strangers who visit there cannot comprehend its language… old words can be narrated in new words…” Putting the notion to practice in his translation of a verse by Hafiz, Faruqi describes a beauty so deep and complex that her reflection “sends the mirror to sleep”. We may never see more than a reflection of the past we’ve lost – that fleeting good that, in Goldsmith’s words, “allures from far, yet as I follow, flies”. But the reflection itself is such a beautiful dream that we are lucky to have seen it at all.