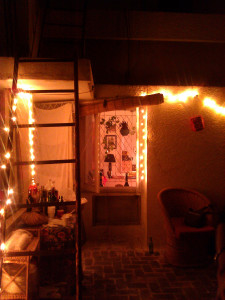 In the narrow confines of Eve’s tailoring shop in Greater Kailash, bunched up between the brocade-covered, sequin-strewn counters and the walls plastered with neckline patterns, a queue of ladies jostles surreptitiously, packed like the rack of blouses hanging behind the unflappable form and appraising eyes of owner Vineet Kumar. In the old city, where Nai Sarak spills into Chawri Bazaar, a flurry of stiff orange, red and golden paper, embossed with elephant heads, swastikas and cursive letters, eddies between the kuchas and katras, trails from boxfuls of last-minute orders being fetched and carried by cycle rickshaw.

Deghs of biryani, sent up from the smoke-singed kitchens of Nizamuddin and Jamia Nagar, traverse Delhi in tempos; tandoors and live pasta stations are lugged by caterers in their brand-emblazoned vans. People stuck in traffic on the road to Chhatarpur sit in their SUVs and sedans, clutching gifts wrapped in silver paper, craning their necks to look at intermittent fireworks in the sky. White horses prance past florist shops, where men snip flower stems, tease petals apart, plump up blossoms and pad cellophane bouquets with strange, glittery foliage. From Shalimar Bagh to Shahdara, the desolate bulwark of banquet halls that rings the city suddenly comes alive with coloured lights and dhinchak remixes. Besides the season’s roses and chrysanthemums, lawns everywhere sprout orchids and marigolds, tent-poles, braziers and dance floors. On the phone from Sadar Bazaar, a leaf-plate wholesaler informs me that one hundred guests is laughably small for a Delhi party; he will be obliged to charge retail rates.

It’s that time of year – when the weather and the stars align, and the city plays host to people from all over the country and the world, supporting a seasonal economy in which to sink one’s Diwali bonus. There are friends and relatives to squeeze in, politicians to pander to with extra-gilded invitations, acquaintances to cull into lists of varying importance, and party crashers to prevent from getting to the bar.

The occasion of marriage somehow transforms individuals into an array of stereotypes; the wedding guests assemble as a recurrent cast of characters: blingy aunty and boozehound uncle, pedantic panditji, stressed saas-to-be, nervous bridegroom and gora guest of honour. Anyone who’s been to a Delhi party would find Flaubert’s description of the attendees of the wedding in Madame Bovary utterly familiar: “The ladies, in their best bonnets, wore town-made costumes, gold watch-chains, tippets with ends crossing over at the waist… The little boys, dressed like their papas, seemed rather ill at ease in their new clothes… and alongside of them, not daring to utter a word, and wearing her white first communion dress lengthened for the occasion… a gawky girl of anything from fourteen to sixteen – a sister or a cousin, no doubt – all red and flustered, her hair plastered down with strong-smelling pomade and terribly afraid of soiling her gloves.” Just replace the communion dress with an over-starched sari, the gloves with its dragging pallu.

The Bovary wedding – a grand, provincial contrast to Emma’s later aspirations and penury – was “a great party where they sat down forty-three to table and remained there sixteen hours, a party which started again next day, and went on, more or less, for several days following”. “Old quarrels had been patched up” in its honour. At a south Delhi wedding I attended, two aunts – sisters who don’t speak to each other – sat on opposite sides of the room at the sangeet. Someone opened a composition notebook with raunchy Punjabi lyrics and the singing began. One sister was shepherded towards the other. Their mother had been famous for her particularly saucy renditions, and though the estranged sisters didn’t look at each other, they couldn’t resist the chorus of shaavaas, and suddenly both were singing with one voice. Not a patching up, but a temporary seam, tacked together during a moment of celebration. And then a Pakistani guest who knew the Punjabi folksongs better than most of us joined in, prompting more emotion than the Google “Reunion” video.

Maybe it was all this getting together that inspired me to host my own winter get-together. And as fun as that was, it was also a reminder that while Delhi parties sometimes bridge divides, they are also clannish moments of exclusion that reinforce the rules of distance between those who provide and those who consume.

After the party and probably due to said consumption, I dreamt that our security guard stood in the lawn with a whiskey in hand, chatting with a newspaper columnist about the impending elections. The dream, like the final scene in Monsoon Wedding where the maid dances with memsahib, like the urge to start chatting up the guys who come around with kebabs, was pure fantasy. The staff whose ceremonies I’ve attended over the years haven’t exactly been guests at our parties. When I first moved to Delhi, I tried throwing together friends from diverse backgrounds, but a couple of awkward situations led to more carefully curated lists.

The next morning, while clearing away half-drunk bottles of cheap wine, I was reminded of Virginia Woolf’s Mrs Dalloway, who wondered how to defend herself from the accusation that she entertained only because “she enjoyed imposing herself; liked to have famous people about her; great names; was simply a snob in short.” “What’s the sense of your parties?” she imagines another character asking. The hostess comes to believe she is motivated by an impulse to stitch together the disconnected realities of the people she knows: “the sense of their existence; and she felt what a waste; and she felt what a pity; and she felt if only they could be brought together; so she did it. And it was an offering; to combine, to create; but to whom?

“An offering for the sake of offering, perhaps,” Mrs Dalloway concludes. Yet in Delhi during party season, her question hangs like smog over the idling traffic fumes, the fireworks and flowers, the piles of trash people burn to stay warm.