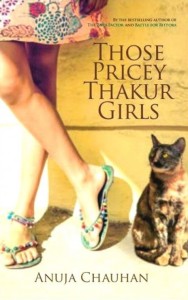 A tall, dark and distinctively handsome journalist with a conscience meets a beautiful, intelligent “DeshDarpan” newsreader with four sisters, a house on Hailey Road and a distinctive mole on her chin. Delhi in the 1980s and India’ widening mediascape are the backdrop of Anuja Chauhan’s latest romantic fiction – her third after The Zoya Factor (which drew on cricket culture) and Battle for Bittora (politics and electioneering).

Debjani, the second-youngest of retired Judge Thakur’s five overprotected daughters is a dreamer with a love for underdogs, who is finally blooming, as her mother might say, into a proper young lady with romantic prospects. She’s just started a job as a national news reader on DD when she meets Dylan Singh Shekhawat, an investigative reporter thirsting for justice for the victims of the 1984 anti- Sikh riots, which he witnessed.

As in her previous books, Chauhan thinly disguises historical characters and events, stirring up a familiar stew of places, dates and personalities. Political scandals, cultural phenomena and a society in transition form a pleasantly recognisable milieu in which the action unfolds on the scale of one family’s dramas. Chauhan chatted with Sonal Shaha about the book.

What were you up to in Delhi in the ’80s and where did the idea of this house on Hailey Road come from?
I passed out in ’88, so most of the ’80s were spent in school. I was exactly where Eshwari [the youngest sister] is in the book. I wanted to write a book about a family property dispute because I know lots and lots of families who were going through that. More and more we all have some grandmother’s house or something which is owned by lots of uncles and aunts. Everywhere people were breaking down bungalows and going in for this condo sort of living, so there was this transition phase I wanted to catch. People had so many brothers and sisters those days and that’s why, I think, those houses are so fiercely disputed now. Also I felt that there was lots of scope for humour. Only in Indian families people will have sued each other but they’ll still be eating breakfast together; they meet at weddings and they’re all hugging and dancing together.

Then Hailey Road – one, I wanted people from all over India to understand, so I thought next to Connaught Place is a good place, because people know [it] and it was like a big hub. Then, I had an uncle, as in a dad’s friend uncle, who had a big old house on Hailey Road – it was notoriously famous for these disputed houses.

The alphabetical naming of the five Thakur sisters was a masterful way of organising the characters…
I gave my husband an initial draft to read and he was like, “Oh my god, I can’t…” So then I thought, I’ll make it alphabetical – and it sort of works with the Judge’s personality. People do these things… name children Raja and Rani… Like my sisters have rhyming names.

There’s this dark backdrop of the 1984 riots, but the house on Hailey road seems constantly drenched in sunshine.
Yes, and that was what was really pissing Dylan off, because he was like: “You guys are clueless! You sit in here and it’s all about girls and their little embroidered shorts! What’s wrong with you!” I just wanted to create that walled garden, where they haven’t even noticed the riots, they have no clue.

Can you tell me more about next year’s sequel, The House That BJ Built?
When I started writing [Those Pricey Thakur Girls] I realised that I can’t write it in one book, because you have to trace several generations. I actually toyed with starting it in the ’50s, but then I thought that’s too [far back]. My daughters are 15 and 17 now and they seem quite into this whole ’80s thing; they were very intrigued.

So in [The House That BJ Built], all these girls are gonna be aunts and it’s going to be a lot about fashion actually because Bonu [a child in the current book] is going to be running, you know, a lot of girls have these little tailoring boutiques and a Masterji and ten people sitting… Because her dad believes in being a businessman, she’s going to have, like, a very strong sense of business, and she’s going to be ripping off clothes from Hindi movies. Anyway, I shouldn’t be talking about it so much…

Do you see the family saga spiraling out into other stories?
I thought I needed to do Eshwari and Anjini’s book, [set] in the ’90s and then come to Bonu’s book in the 2000s, but I don’t know. I’m so un-enamoured by the ’90s. I spent [them] having children.

How did you keep track of all the individual histories?
With this one I went a little crazy. Actually, I must have written about 800 pages, and the book is only 400 pages. So I took it forward a lot more before I realised, oh god, I need another book. I was just completely ruthless – I chopped out and threw. But the only thing I felt really bad about cutting was Dylan and Debjani’s church wedding and then a Hindu wedding and then a wedding night…

If you could imagine writing about 2013, 30 years in the future, what kinds of details do you think you might pick out?
I think that only with the wisdom of hindsight can you write that kind of stuff. Because if you were writing in the ’80s, you’d have assumed that Doordarshan was powerful… booking a trunk call after 10.30 and all that… these are things that only make sense because you have the benefit of hindsight.