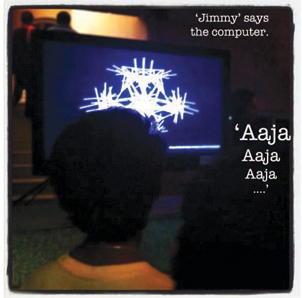 It might seem like the height of irony, but Arjun Jassal, creator of Delhi Hectic, insists that his new online graphic novel project is a sincere attempt to make sense of Delhi’s pretentious, disjointed social scene. The story features Jassal and his friend Aazar Anis as they wander into various city situations like an ’80s party and a book launch. The self-described mediageek and co-owner of Blue Ant Digital Intelligence told Sonal Shah about the project.

How’d you come up with the idea of an Instagram graphic novel?
When I started writing Delhi Hectic, in my head, it was “graphic novel”. It was almost like Scott Pilgrim moves to Delhi and goes noir. [It was] only when I realised that no one wanted to illustrate it that I decided to play with the definition of the word “graphic” and use pictures instead. After all, pictures are graphic too. But just pictures weren’t enough, they had to be pictures that connected to what I was saying and feeling. That’s when I realised that Instagram would be perfect. After all, Instagram is nothing but an image chronicle of your life. I am a graphic novel fan. I just wanted to make one myself!

Are the pictures taken while the events are taking place?
Some pictures are from actual events I talk about, others have been repurposed to fit the story arc. We decide on the characters/ events we want to talk about, convert them into 500-700 word chapters. Then use the crux of the text and post it on the images using Photoshop. It’s all quite quick and simple.

How factual are the stories?
The stories are all based on real events. Each party, each character and each situation is based on something I witnessed or have been part of in Delhi. But in the interest of making this coherent, certain conversations have been shortened and certain interactions have been created to either introduce a character or remove them from a chapter.

By creating an Instagram graphic novel, might you be participating in the very social scene you feel alienated from?
I don’t think there is a “social scene”. In fact, the whole feeling of Delhi Hectic is that we want to be part of a scene, something coherent, something that gives us a voice, makes us feel like we’re part of something much bigger than us. But no such scene exists. All Delhi knows or understands as a “scene” is a place where people can dress up, show off what they can buy, and post fashion magazine-like pictures on social networks. It makes me sick.

I feel “alienated”, if that’s the word you want to use, because I feel that Delhi no longer has public spaces where people can just be. Places where you don’t have to deck up. Places where you don’t have to buy expensive stuff. Places where you can be, and say, and do what comes to your mind. Within the bounds of certain convention, of course. Delhi has gone from a bazaar to a mall. It’s all pretty, it’s all glass and metal, it’s all air conditioned. But it doesn’t have a space to express itself. Instead, something has been uprooted and planted here, and we’re all expected to play by its rules.

Is this at all an ironic exercise?
I don’t think Delhi Hectic is ironic. What the words say is what we feel. We’re not trying to tell people to be otherwise. We’re not expecting a change. We’re just telling you what we feel when we’re in the same situations as you.

Ideally, how would you like your Delhi story to end?
It’s too early to talk about it. After all, we’ve just begun!