Nivedita Menon sets her sights on a broader audience ♦ 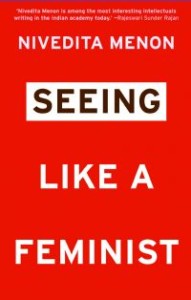 Don’t attract attention, don’t get yourself raped. Do get married and definitely make babies. In the face of all these patriarchal rules, we want justice and it’s pretty much a given that we want it now. Feminist scholar and activist Nivedita Menon wouldn’t necessarily dismiss the sentiment, but her new book, written for a non-academic audience, is something of a reality check in the midst of all the calls for treating the so-called fairer sex more squarely.

There’s a recognition running through Seeing like a Feminist that the fruits of true justice take their own sweet time to grow out of the bitter earth of oppression. Menon, who is a professor of political thought at JNU, told us there was “no urgency at all” in writing the book. She added that while its appearance in the wake of heightened awareness of gender violence “happens to look like it’s come out at a particular time when its relevance seems very great… [the book] distils everything I’ve been writing for 15 years.”

If that makes it sound like Seeing like a Feminist is a musty, fusty fatalistic bout of shouldershrugging, absolutely nothing could be further from the truth. Menon cuts through layers of legal debate, social norms of marriage and motherhood and economic questions of property and capital, employing a feminist version of X-ray vision that cuts right through the constructions of sex and gender in India and abroad. In language that is incisive, readable, reasoned and yet impassioned, Menon argues for action that “destabilizes” conventions rather than seeking “resolution” to conflict. “Destabilizing is sometimes through self-conscious political movement,” conceded Menon, “but I think overall it is a transformation of the ground level of common sense. And that happens definitively but also almost imperceptibly.” So while the Delhi protests were not “really about destabilisation [but] a very quintessential democratic civil disobedience,” Menon argues that real change in society comes from “the kinds of ways queer people live; women and men who don’t choose to marry, or marry and do different kinds of things with that marriage; when workers organise; domestic servants organise.”

Taking in issues related to family, the body, desire, sexual violence, questions of gender and agency versus victimhood, Menon handily demonstrates how conventional appeals to the law are often less successful than destabilising actions and economic or social empowerment. “I see feminist politics as subversive and the law is really about order,” Menon said. Calling herself an “extreme critic of turning to the law”, she alluded to the controversial antirape ordinance, pointing out that “Every time a law is formulated out of a movement, it is inevitably a distortion of the feminist ethics.” Our views on equality are often warped by our basic perceptions of reality. Seeing like a Feminist goes a long way in correcting this vision.