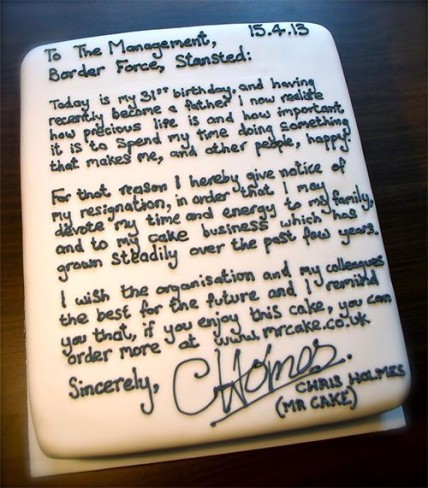 Leave-taking has been on my mind lately, and my thoughts found their reflection in a photo currently making the social media rounds. The picture shows a resignation letter in edible form: a passion cake (prosaically: carrot cake) with white icing, over which is piped a letter by one Chris “Mr Cake” Holmes, formerly of the St­­ansted Airport immigration control force. “Today is my 31st birthday,” Holmes neatly scrawls, “and having recently become a father I now realise how precious life is and how important it is to spend my time doing something that makes me, and other people, happy.”

Holmes may not have anticipated his letter going viral after his brother-in-law tweeted the picture. But a plug in the note for his new cake company garnered the most brilliant word-of-mouth publicity he could ever have hoped for – closing out one career while launching another. The photo’s virality speaks not only to the widespread love of cake but also to that other universal desire – niggling in some people, burning in others – to dig into one’s passions with both hands, or possibly head first.

Following one’s dreams is a sentiment common to the resignation letter genre, which surely deserves recognition as a literary form. As with Holmes’ epistolary cake, it often consists of self-reflective stock-taking; it offers the writer a chance to articulate feelings about a new beginning in a semi-public way. A foot-long cake isn’t always required; sometimes a short note has more impact. Famously, though probably apocryphally, when travel writer Bruce Chatwin resigned from London’s The Sunday Times to finally chase the open road, he did it via telegram, simply telling his editor he had “Gone to Patagonia” for a few months and never coming back.

Yet these parting missives often have a purpose beyond declaring one’s dreams. As a rare type of written expression relatively free from payment or patronage, resignation letters are among the most honest forms of communication. Some veer toward whistle-blowing, like the Goldman Sachs executive who published an account in The New York Times last year, describing why, after over a decade, he was leaving his employer. Such leave-takings of conscience ring with a noble self-righteousness.

But there is also plain, old-fashioned bitching, moaning and damning – the sheer joy of crafting a parting shot that vents all the pent-up frustration of working life. One of the most devil-may-care letters I’ve read is by William Faulkner, quitting his position as postmaster at a US university: “As long as I live under the capitalistic system, I expect to have my life influenced by the demands of moneyed people,” he acknowledges. “But I will be damned if I propose to be at the beck and call of every itinerant scoundrel who has two cents to invest in a postage stamp. This, sir, is my resignation.” One might argue that 90 years later, Holmes’ cake-letter contains the same basic sentiment – just extremely well sugar-coated.

Some letters damn with faint praise – and it’s not surprising that George Orwell’s resignation from the BBC is a masterful example. In his 1943 letter, he thanks his employer for its “very great latitude” and “generous attitude”. He continues with a confessional critique: “I have been conscious that I was wasting my own time and the public money on doing work that produces no result. I believe that in the present political situation the broadcasting of British propaganda to India is an almost hopeless task… I could be occupying myself with journalism which does produce some measurable effect.” For its part, the BBC released him with a gracious assessment: “He is of a rare moral dignity: his literary and artistic taste is unerring.”

A less coherent resignation is found in Upendranath Ashk’s short story “Letter of Resignation” (see p71), in which a sub-editor says he’s quit a national daily due to “the sorrowful condition of my grandfather… the terrible ill health of my wife… I’ve started to suffer from insomnia… I’ve developed bleeding haemorrhoids from sitting in a chair all the time and diabetes is eating away at my insides.” In another medium, Cy Twombly, king of doodlers, echoes this process of revisionist justification in a drawing series called “Letter of Resignation”, consisting mostly of enumerated lists with scratched-out entries. Some gems have floated through my inbox too – one in particular cited an employer’s “panopticon gaze” and overbearing emphasis on deadlines as the excuse for not being able to adhere to them.

The reason I’ve been thinking about resignations and goodbyes is that this is in fact my last issue as the editor of Time Out Delhi. As I leave, I won’t start confessing, grousing or enumerating my motivations here (unfortunately they don’t involve cake), but I would like to thank the magazine’s readers, long-time contributors and my colleagues for making working on a total of 108 issues very much worth writing home about. All the best – and a happy May Day to all the workers of the world.