Delhi: Adventures in a Megacity ♦ 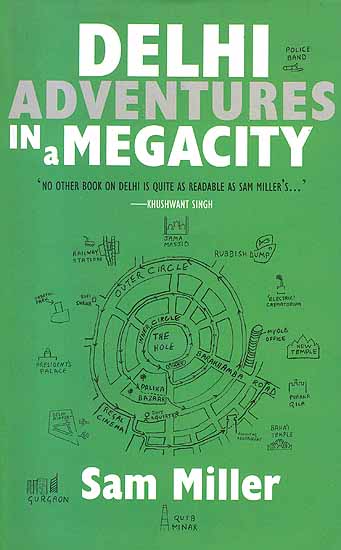 Journalist Sam Miller’s new book Delhi: Adventures in a Megacity describes the British expat’s walks around town, which followed the same spiral route he’d laid out for himself. We phoned him as he was commuting, by foot, from his office in Hauz Khas to his home in Panchsheel. “I’ll call you back,” he said. “If you walk and talk you can get run over quite easily.” After he was home, we chatted with Miller about his urban walking tour.

You lived in Delhi in the early 1990s when you were with the BBC’s World Service and returned (also with the BBC) in 2002. What do you see as the biggest difference between then and now?
Delhi has become a kind of international city. In the ’90s it felt small, it had a village-y feel, but that’s no longer the case – it’s a megacity, as I have called it in the book. Then there’s the incredible growth of suburbs. On a more personal level, there are nice restaurants that aren’t in hotels, and it’s a much better place to walk around, partly because of the maps that are now available. There are more foreigners walking around. I don’t stick out in the way I used to.

How did you decide to write a book on the city?
I began walking before I knew it was going to be a book. I decided on the spiral shape because it would force me to get to new places. I had written a very different piece about walking in Delhi for a magazine that spurred me on to write. This is my first book, and I began it without thinking of publishers or anything, but I became addicted to doing it. Sometimes I’d wonder if there would be anything to write about, but I would always come back with too much to write about, too many stories.

Did you ever feel you wanted to dwell on certain experiences more than you could in your book?
I felt at times that I wanted to linger longer in certain places – even my walk from work to home, my neighbourhood: I didn’t end up covering much. But part of the message of the book is to try and get people out into their own neighbourhoods, to explore them. There are things I just mentioned in passing – the Christian, Jewish and Parsi cemeteries. I didn’t write about them as I was very keen on the book being about the living and not about the past. I left out the monuments. This is a resolute attempt to see Delhi as it is now and how it will be in the future.

Did any area have a bigger impact on you than the others?
Ghazipur, next to the main fish and chicken market. It’s next to this huge mountain, which is a rubbish dump. Visually, that’s the most memorable – if not entirely salubrious – experience. Then there are the areas of green. The fields of the Yamuna are amazing. You can see the buildings [of Delhi], but where you are, there are just seasonal huts and fields with cauliflowers and aubergines and sugarcane.

Your book is covered with accolades from William Dalrymple, Khushwant Singh, Mark Tully… Have you been inspired by any particular writing on Delhi?
I’ve read a lot, but the one thing that’s really inspired me is Ruth Prawer Jhabvala’s The Householder. Obviously, you can’t write on Delhi without reading Khushwant Singh, William Dalrymple, Ahmed Ali and Anita Desai: to say that Delhi has not been written about is just not true. But I would argue that their writing is, for better or worse, about a city that is largely gone. The city of the past is always there. You can’t really avoid it, but even William’s book was written in ’92- ’93, so it’s still a very different Delhi from today.