When the COO of Le Meridien hotel first showed a tendency towards hoarding, it seemed an innocent enough personality quirk. Tarun Thakral was studying hospitality in France in the early ’90s when he noticed that the people around him seemed more interested in their side projects than their courses of study or jobs. “People spent a lot of time on their hobbies there. Growing up in India, one was urged to focus on school or college,” he said.

We glanced around his office as we chatted with him. Behind him were display shelves filled with rows of toy cars. “When I returned, I wanted to spend some time on myself. I was in Rajasthan when I started collecting gramophones and other antiques,” he said. Soon enough, he was a feverish victim of the collecting bug. His first vintage car was a 1932 Chevrolet, which he bought in Rajasthan. Today, he has 31 cars parked in his garage.

But that’s not all. “I got tired of just collecting cars. There are so many museums and collectors of antique cars. So I thought I would expand to trains,” he said. Until recently, he had a 1932 railway saloon, which once belonged to the Maharaja of Jodhpur, parked on his farmhouse plot. “I wrote to the Indian railways asking if they had anything and eventually they wrote back telling me they had this saloon that was about to be scrapped.” Thakral had the carriage restored and converted into an apartment, where he and his family would spend weekends. 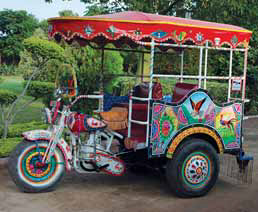 That saloon and all of his other transport wonders – along with a 1947 Piper Cub aircraft, purchased through an open UP government tender – are currently in storage. That’s because Thakral has big plans for his collection. “The government has approved plans for India’s first transport museum in Manesar,” he said. “We’re beginning construction and I hope to open it to the public in November.”

Besides the cars, train carriage and plane, he’s got lithographs from British times that depict or describe indigenous modes of transport. He’s also the proud owner of some motorcycles, rickshaws and bullock carts, and even a motorcycle- rickshaw. “Those used to be everywhere until the government banned them in 1999. One guy sold me his for about 5,000 rupees. We may not think anything of this vehicle, but look at it from the point of view of tomorrow’s generation,” Thakral said. “This one was painted by a Pakistani tribal-truckpainting artist, and I think it’s beautiful,” he added, showing us a photo, and we had to agree.

Thakral also has old-fashioned enamel petrol pump signs – “this is actually meena work, like what is done with jewellery” – as well as old postcards, automobile stamps and more. His plans for the museum include a cafeteria, a children’s area and conference area.

Thakral has hired a curator and the museum will be divided according to centuries. “It will be like walking down a street of the 1800s, with the carts and carriages – and then turning on to a street of the 1900s.” The man certainly has enough material to flesh out his idea.

We followed Thakral around his office as he showed us some mementos, framed articles about his collection and strange knickknacks. We were particularly fascinated by two alcohol flasks doubling as music boxes and shaped like Mercedes grills. We’re looking forward to more when the museum opens.