Winter may well be gone, but our ashen city’s pall of pollution lingers on. A close look at Delhi’s visible air ♦ 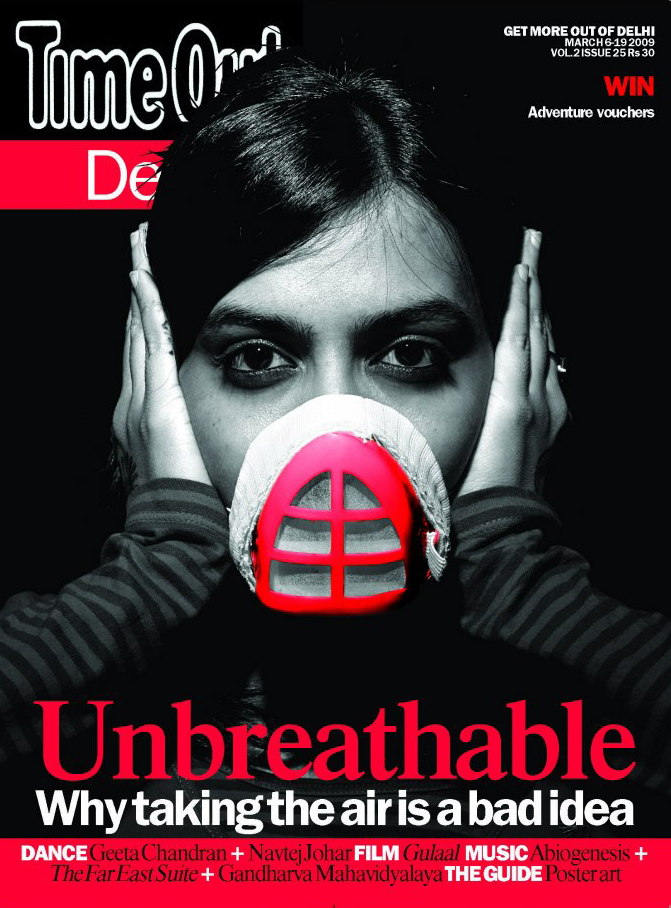 Union Health Minister Anbumani Ramadoss may have banned smoking in public areas, but – as any masked Japanese tourist will tell you – breathing in Delhi’s free, unfiltered air poses health risks in and of itself. We haven’t forgotten the five-year respite that followed the implementation of CNG-fuelled public transport in 2002. But the smoggy winter of 2007 had many people nursing wheezes and other respiratory ailments and – despite Meteorological Department finger-pointing at a chance weather “inversion”– scratching their heads over pollution data that showed an increase in certain types of contamination. Our lungs have already proclaimed 2008 to have been another winter of discontent. So we set out to understand just what is up with the air.

Investigating air pollution in Delhi is an exercise in decoding acronyms; not only in terms of the polluting agents, but also of the various agencies that monitor and aim to reduce it. The Central Pollution Control Board (CPCB) is the main monitoring agency under the Ministry of Environment and Forests (MoEF). The Delhi Government’s Department of Environment has its own body – the Delhi Pollution Control Committee (DPCC) – to which the CPCB has delegated responsibility for the NCR’s air. Because of the vehicle emissions angle, the Ministry of Transport and equivalent state-level bodies have been involved, as have various energyrelated committees, ministries and corporations. Then there are the NGOs. Centre for Science and Environment (CSE) – the driving force behind Delhi’s adoption of CNG – warily shares top-billing in the news media with The Energy and Resources Institute (TERI). Last year, a younger group, the Indian Youth Climate Network (IYCN), joined the fold.

The four major pollutants that the CPCB and the DPCC monitor are sulphur dioxide (SO2), carbon monoxide (CO), nitrogen oxides (NOx) and particulate matter (SPM, which is suspended solid particulate matter, and especially RSPM, respirable particles that are small enough to breathe in). Other pollutants include ground-level ozone, or O3, and uncombusted hydrocarbons (HCs).

So what causes all these nasty little chemicals and dust specks to clog up our skies? Interestingly, there is no in-depth “source apportionment” study that conclusively determines what percentage of each pollutant comes from which source. (There have been a few cursory studies, at best.) The CPCB has been conducting just such a study for the past two years and scientists at the organisation claimed that the final draft of it will be accessible some time this month. We don’t know the shape of it yet, but a careful analysis of such a study is just the thing policymakers could use to frame more sharply targeted laws.

But let’s look at what we know so far. According to current CPCB estimates, 13 per cent of our city’s air pollution is due to thermal power plants (Delhi has three coal-burning plants in Badarpur, Indraprastha and Rajghat), 12 per cent due to small-scale industrial activity, and eight per cent due to domestic combustion, like people burning wood for cooking and heat. The bulk, which is almost 70 per cent of the total pollution, is ascribed to vehicular emissions.

In comparison to this last wheel-borne menace, the other sources are almost insignificant. In a nutshell, this is where things stand with them. Theoretically, our power plants should already be making every effort to be as clean as they can be. According to the CPCB, SO2 pollution from coal fires has been greatly reduced after the introduction of LPG. Caroline Howe of the Indian Youth Climate Network pointed out that a large transient population of labourers was the source of the remaining fires. According to Anumita Roychowdhury, associate director of Research and Advocacy at the CSE, this can be tackled by moving people up the “energy ladder”, which essentially means making fuels like LPG and even solar cookers available to the people who’re burning wood right now. We met up with executive director of the IYCN, Kartikeya Singh, and spoke to him about industrial pollution. His take was that industry in Delhi is difficult to regulate because it is a “non-point source” – that is, made up of many small clusters of polluting industries, such as at Lawrence Road Industrial Area in west Delhi, where small workshops labour at food packaging, making metal widgets and other sundry activities. Surely even the Supreme Court can’t kick everyone and their livelihoods out of the city. So, the larger point is clearly what’s staring every Dilliwala in the face every time she steps out on a road with a hanky over her nose. Vehicular emission is what needs to be controlled, and quickly.

Several studies have tried to understand why the implementation of CNG public transport hasn’t managed to control pollution. According to one 2007 study by Urvashi Narain and Alan Krupnick (published by Washington DC-based NGO Resources for the Future), the switch from diesel buses to CNG helped reduce SO2 and CO levels, while the rise in SPM appeared to be unaffected by CNG.

We asked Roychowdhury, who heads CSE’s Right to Clean Air Campaign, why CNG measures haven’t been enough to curb Delhi’s RSPM levels, which by some estimates are second only to Cairo’s (World Bank, 2006). “What we’ve had is the first wave of reforms,” she said. “There now needs to be a second wave.” What that comes down to, at least for Roychowdhury, is to get Dilliwalas into public transport.

What is clear is that the culprit for rising particulate and NOx levels is the addition of “literally 1,100 new cars on the road every day,” as Roychowdhury put it. Though not everyone agrees on that figure, there is consensus that the wholesale move towards fourwheeled private transport is at the heart of the pollution problem. The fact that there is an increase in diesel-driven private vehicles (the cost of diesel is highly subsidised, even though Delhi’s diesel-guzzlers are often expensive imports) has also added to pollution. This is despite the fact that the diesel itself is lower in sulphur content than before.

So, everyone – from the long-timers at CPCB to the cross-country electric Reva-driving upstarts at IYCN – agrees on a solution: public transportation. “Public transport was neglected for far too long,” said Roychowdhury, explaining why bus users, as a percentage of total commuters, fell from 60 per cent to 49 per cent this past decade. As Ankur Garg, a research fellow at Indian Institute of Technology Delhi and a member of IYCN pointed out, “fixing public transport has the double advantage of solving road traffic problems and reducing air pollution.” And all roads, surprisingly, seem to be leading to the Bus Rapid Transport system as a solution. According to a survey conducted by CSE, the IYCN and the NGO Delhi Greens last year, the majority of consumers (including car owners) see the wisdom behind providing a more efficient, user-friendly bus system.

For this to work, though, certain measures need to be implemented. Singh pointed out that while the government plans to add 6,000 buses to the fleet to increase frequency and capacity, there are currently only three plants manufacturing the vehicles. “We need a greater manufacturing capacity, and also need to ensure that buses are designed with a warm climate in mind. Buses create a natural air pocket behind them as they move – leaving the back open would naturally allow for better circulation,” he suggested. According to CSE’s estimate, the city needs a fleet of 14,000 buses for a fully functional bus transport system. Roychowdhury also strongly advocated removing the yearly tax on buses (between Rs 10,000-14,000), which is much more, over the life of a bus, than the one-time tax collected from the owner of a car. To encourage people to ride public transport, CSE believes parking rates for private vehicles should be on par with other world cities. Park and ride facilities, feeder services to the Delhi Metro and space to cycle are other necessities. The Ring Railroad, built for the Asian Games, failed to be useful precisely due to its lack of linkage with other public transport systems.

There are more players at the air pollution table now, as compared to a decade ago, when the very public spat between TERI and CSE over which fuel Delhi’s public transport should use (low sulphur diesel and CNG, respectively) occupied centre-stage. The influx of youth-oriented groups like the IYCN is a positive step. The reams of pollution data unleashed by the Right to Information Act and available (almost) at the touch of a button on the CPCB and DPCC’s websites, are another step in the right direction. As more nuanced analysis of this data is undertaken – not only by government bodies but also by independent scientists – better directed public policy decisions can (hopefully) be made. “After the IT revolution, I believe we need to have an ET [environmental technology] revolution,” enthused Singh, who dreams of electric buses running on the BRT one day.

Meanwhile, as private traffic gets choked in the two measly lanes that run along the bus corridor, at least we can be grateful that, little by little, our lungs are unclogging.