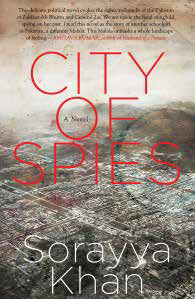 Pakistan was scorchingly hot during the summer of 1977, the narrator of City of Spies recalls: “the newspapers were filled with worry that rain might never come”. And the persistent Cold War chill in relations between the United States of America and the Soviet Union only meant that the politics of the subcontinent were simmering too. A day after the American Embassy in Islamabad celebrated its country’s independence, things finally boiled over. As some of the worst floods in its history hit Karachi, the papers reported that General Muhammad Zia-ul-Haq had imprisoned Prime Minister Zulfikar Ali Bhutto, accused of election rigging and murdering political opponents, and declared martial law. The General’s photograph was splashed across the front pages, with his eyes “cast down, as if he were posing reluctantly, like a Pakistani bride”.

In the decades since then, historians have researched, in depth, the transformation of Pakistan under the eleven years of Zia’s rule, as well as substantiated many of the open secrets about the international influences that allowed his regime to flourish. Several novelists have also attempted to unearth the gritty truth of life from beneath the heavy monolith of dictatorship, to describe how things changed, incrementally but irrevocably, as the State and military became further entangled with religious extremist groups and foreign superpowers. In his satirical novel, A Case of Exploding Mangoes (2008), Mohammad Hanif channeled the comedic voice of a fictional junior air force officer to retell the story of Zia’s death – and suspected assassination – in a 1988 plane crash. In her very different debut, In the City by the Sea (1998), the London-based author Kamila Shamsie described the cost of Zia’s ruthlessness on the life of a child growing up in Karachi.

Sorayya Khan’s third novel combines elements of both these seminal books: her first-person narrator is an 11-year-old girl, Aliya Shah (rather unfortunately characterised as “a different Malala” by Amitava Kumar in a cover blurb). Aliya is the “half-and-half ” youngest child of a Dutch mother and Pakistani father, who believes that “being white is… being whole. And knowing it”. She is also keen enough to understand that her mother has become “brown” by “being married to my father… though, of course, you couldn’t tell by looking”.

In an essay on “The March of the Novel Through History” (Kenyon College, 1998), Amitav Ghosh, whose novel The Shadow Lines (1988) resonates in the pages City of Spies, wrote that to describe one’s environment, “one must somehow distance oneself from it… one must assume a certain posture, a form of address. In other words, to locate oneself through prose, one must begin with an act of dislocation”.

Like Ghosh’s landmark novel, City of Spies is a story of dislocation with diasporic dimensions, freighted with questions of national belonging. But unlike The Shadow Lines, or Kamila Shamsie’s sweepingly international Burnt Shadows (2009), Khan’s book is rooted in a particular place and time. Her characters do not range too far and wide, even if the causes and consequences of the things that happen to them in the 30 months following Zia’s coup spiral out from Islamabad, the titular city of spies, to places like Teheran and Cazenovia, New York.

Aliya is certainly a character at odds with her environment, but her moment of dislocation occurs as prologue, before the story begins. The Shah family is uprooted from Europe when Aliya’s father, bound by a patriotic sense of duty, leaves his United Nations job to head a Pakistani government agency. The family settles in what Aliya’s grandfather (a protagonist of Khan’s previous book, Five Queen’s Road, set in the aftermath of Partition) calls the “fake” city of Islamabad, a city that pales in comparison to his beloved, history-soaked Lahore.

Aliya’s self-conscious thoughts about her identity, and her observations, are a useful lens through which to view the rippling effects of the General’s political machinations in the public and domestic spheres of Pakistan’s capital. She is mostly able to keep the two halves of her life – the Shah household and the American School where she studies – separate. But as a sensitive pre-teen, she is also aware of the tension flowing through Islamabad’s wide, empty streets. In her eyes, the city is a playground for several strange games. There’s the competition for dominance between the cars marked by Soviet and American diplomatic license plates, surrounded by the clamour of a bevy of less identifiable plates from smaller countries, the pawns of this board. From the vantage of her seat on an incongruous yellow school bus, Aliya also has a ringside view of the spitting game the American boys play, targeting hapless Pakistani passers-by. Aliya cringes, but is unable to stand up to her schoolmates.“A small part of me believed that Pakistanis deserved to be spit upon,” she remarks. “I wasn’t proud of this, of course…”

These road games provide a neat dramatic setup for the tragedy at the centre of the novel, an event that causes Aliya’s discomfort to blossom into a full-blown identity crisis. Hanif, the young, Bhutto-obsessed son of the family servant, Sadiq, is killed in a hit-and-run accident. When Aliya discovers that the car was driven by the mother of her American best friend, the accident becomes conflated in her mind with the fate of Pakistan. Her personal loss – sharpened by guilt at her inability to have communicated with Hanif when he was alive – becomes a political one. “With the hit-and-run accident on an Islamabad street, Anne Simon had behaved in her personal life the way American governments behaved in the world, doing whatever they wanted without, for the most part, suffering any consequences.”

Khan writes this death with heartbreaking subtlety, keeping it from lapsing into a cliché plot twist by revealing the details of the accident to Aliya in bits and pieces, as the adults around her attempt to censor the information. City of Spies is not a particularly long novel, but Khan’s tight rein on its pace and artful ratcheting up and down of action make the consequences of the accident appear to slowly unfurl in the characters’ lives, even as the months pass swiftly by. (There are also many lovely distractions along the way, such as the juxtaposition of various cuisines: Aliya’s mother’s European baking; the imported junk food from the commissary stockpiled at her friend’s house; and Sadiq’s cooking, which makes her house smell “like Pakistan” to an American visitor.)

As Aliya begins to view Hanif’s death, compounded by Bhutto’s hanging, in geopolitical terms, she begins to see herself as Pakistani, despite being alienated by language and class from most of her fellow citizens. “Knowing who’d killed Hanif made the spaces in my life fall into each other like collapsing sand tunnels. It would be impossible to separate them, reshape them and restore them to the way they had been.”

In an attempt to give the accident some meaning, Aliya begins to secretly learn Urdu, with Sadiq’s help. Their friendship, built over convincing, though halting, dialogue, is just one of the tenderly drawn relationships between Khan’s memorable, sympathetic characters. In a way, her simple but emotionally packed story is an attempt to depoliticise the personal, or at least to find hope in the power of communication between two people to subvert the structures of power in which they exist.

It takes years for Aliya to understand that learning a language is only one aspect of this sort of communication. After a riot, spurred by suspicions of American involvement in a siege in Mecca, results in the burning of the American Embassy, a rift forms between Sadiq and the family. At the time, Aliya thinks of the riot as another kind of game: “I was suddenly reminded of Klackers, the game of two balls suspended on a string. When one ball hit the other, the klick-klack sent it careening. Countries were connected to each other the same way, which made our world a very scary place.”

Aliya’s thoughts – and the event itself– recall the reflections on a different riot, on the other side of the subcontinent, by the narrator of The Shadow Lines as he tries to “learn the meaning of distance” while drawing circles on maps. Attempting to “imagine an event, any event, that might occur in a city near the periphery of that circle” that could bring people at its centre “pouring out into the streets”, he comes up with “none, that is, other than war”.

“My parents tell me that we are defined by the wars we have lived, regardless of whether we can name them,” the grownup Aliya tells us in the prologue, “The war of my story, the war we shared long ago, whether we knew it or not, is the Cold War.” Riots, the civilian violence often engendered by war, are real and inexplicable —“to look for words” beyond the simple description of these events “would be to give them meaning… a risk we cannot take any more than we can afford to listen to madness” cautions the narrator of The Shadow Lines. But Khan also wants to suggest the possibility of a thaw; of reconciliation through communication, however imperfect. In her story, the city may be full of spies, and people prone to making mistakes, but they are also capable of forgiveness and surprising humanity. In her attempt to square Pakistan’s dire news headlines with the minutiae of life, there is a plea for giving people the benefit of the doubt, for faith in sanity even in the face of madness.

Originally published in the September-November 2015 issue of Biblio.