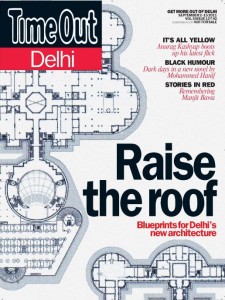 As a changing climate and growing population stretch Delhi’s reserves of energy and water, the importance of buildings that work with the environment, rather than against it, grows as well. Some buildings already do – if you go by the Leadership in Energy and Environmental Design ratings system, then the gleaming new towers of the NCR are apparently leading the way. “Where environmental sustainability is concerned, I have to get a rating,” the architect AG Krishna Menon confessed. “It’s become very routine; my client will insist on it.” But as architect Anil Laul more brusquely put it: “Sustainability is a practice of monkey see, monkey do.”

Laul’s cyncism about sustainability ratings strikes a chord with many Delhi architects, who believe that “green” scores could turn environmentally conscious design into a game of clever numbers. LEED is criticised for pandering to ecologically costly whims, and then adding financially costly fixes. “It is a totally irresponsible stylistic indulgence when you first build solar cookers and then try to refrigerate them,” said architect Ashok B Lall, a leading designer of eco-conscious buildings. “No matter which way you look at it, it’s just bad architecture.” Corporate towers with platinum LEED ratings may be more easily marketable to foreign investors, but they’re also more reliant on imported materials; one reason Madhav Raman, a partner at Anagram Architects, calls it “a mini-economy, feeding off the paranoia of climate change.”

In contrast, architects like Lall think the way to build green in India is to turn to traditional techniques and local materials. His offices for Development Alternatives – which calls itself Delhi’s greenest building – uses 90 per cent local and recycled materials, such as mud and fly ash brick. It maximises natural light and ventilation, and has “hybrid” air-conditioning that adapts to different seasons.

Not that there’s anything new about this logic. “Barring the last 20 years, all our buildings have been sustainable,” said Manit Rastogi, founding partner of Morphogenesis. “Step into any fort and there will be evaporative cooling and solar controls. The reforms of 1991 made us think that we could detach ourselves from our climate because we have the mechanical and electrical power to do it.” Several architects do use local materials – and some go further than others. Revathi and Vasant Kamath sculpted their house from stone and mud dug right out of the foundation. The earthen structure, with its living green roof, acts like a part of the landscape. Building locally also emphasises natural cooling and ventilation: hollow walls, shading jails and courtyards that release hot air. Lall believes that up to 70 per cent of the materials we need for urban development could potentially be recycled from construction waste.

In small ways, recycling material can give a building its own personality. For the Jaishankar Memorial Centre in Sarita Vihar, the architect KT Ravindran purchased all the doors and windows second-hand from a “big broken-down-things market” on the nearby Yamuna bank. “Normally, poorer people buy from there,” he said, adding that the pieces had their advantages: “They’re already well-cured, they’re termite resistant, they’re inexpensive, and they have a certain character because they come from the ’50s and ’60s.”

Cutting and pasting local materials and techniques isn’t sufficient for a practical, scalable and yet sustainable architecture. “The vocabulary of an architect must range from the highest to the lowest technology,” said Revathi Kamath, whose uses everything from bamboo and mud to steel and glass. In 2008, the Energy and Resources Institute devised guidelines for genuine, locally-responsive design, which considers orientation and site, touches on labour rights and only certifies buildings after they have been occupied for a year. The Green Rating for Integrated Habitat Assessment, or GRIHA, is less marketable than the LEED rating, but it’s more stringent, and it’s backed by the government.

Currently, only a handful of buildings in the NCR are registered for or certified by GRIHA. One is the Commonwealth Games Village, which achieved two out of five stars, but would appear in any environmentalist’s Most Wanted poster for ecologically liable buildings, thanks to its site in the middle of the Yamuna floodplain. The Games Village illustrates the ultimate limitations of ratings: They treat buildings as islands.

To be truly sustainable, construction must respond to wider environmental challenges, structures around it, and the people who interact with it directly and indirectly. Kamath summed up the problem of holistic sustainability in Delhi: “The land in Delhi is not free – it’s not available for innovation at the moment.” Trussed up in bylaws that perpetuate a fear of density, Delhi plots are more often mini-fortresses than symbiotic parts of a whole. Stephane Paumier, the architect of the Alliance Française, believes this began with the “urban failure” of British New Delhi. “It was designed to keep people at bay. What the British did was then Indianised in the colonies that were planned later, but in a similar pattern: taking land, making divisons. Delhi is a city of boundary walls.”

Green-rated buildings on the city’s outskirts, though more numerous, are prey to market forces that associate sustainability with an “international” aesthetic. The higher costs of this aesthetic make these buildings green bunkers, deepening the perception of eco-friendly design as a kind of jacuzzi – a luxury for those who can afford it. But sustainability doesn’t need to go hand-in-hand with expense, especially if urban planning becomes a larger part of constructing buildings.

The government has a critical role to play in combating the impression of greenness as an expensive import. Its backing of GRIHA is a step in the right direction, as are a few projects like Laul’s low-income slum resettlement colony in Jaunapur. (Although progress on that particular project became mired in court when neighbouring farmhouse owners claimed that the colony would use too much water.) “The rich man is also looking for a low-cost solution,” Laul pointed out. “Common sense is applicable to the poor as well as the rich – only then will you get sustainability.”

Whether this change trickles up from the example of landmark green buildings, or down from progressive urban policy, it will need to be accompanied by a rejection of the “city of boundary walls.” No building is an island. No road should be a no-man’s land between colonies that are tiny nations unto themselves. But until we get over our tendency to shut out, rather than open onto the city, sustainable architecture will remain just green cladding above a grey cornerstone.