In Gulammohammed Sheikh’s first solo show in a decade, the­re are maps everywhere. There is Sheikh’s version of the thirteenth-century Ebstorf mappa mundi, a European world map that was lost after World War II. There are aerial cityscapes based off of Google Maps. A fold-out “Book of Journeys” catalogues Sheikh’s travels over the past decade. And there are mandala-like paintings that could be considered mental or psychological maps.

These maps are marked, not with conventional signposts, but with recurring motifs. Repeated fig­ures are symbolic short-hand for a host of associations: Gandhi, recently returned from South Africa, and then later with his walking stick; Majnu, chained and being led by an old woman; the Virgin Mary and Mary Magdalene, Chinese-style bodhisattvas and Persian farishtas, Kabir at his loom. Just as often, Sheikh’s figures are unnamed but archetypical: a cycling man, a group of smokers, a rapist, a sweeper. 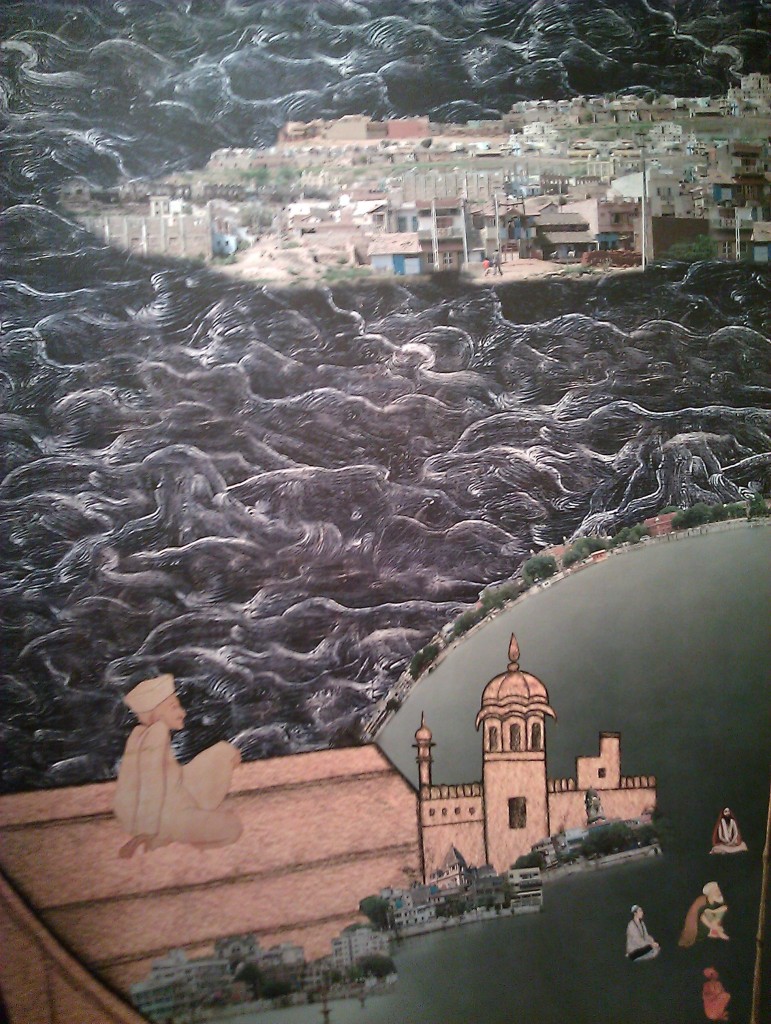 His exhibition, City, Kaavad and Other Works, will be held at Rabindra Bhavan with an additional collection of smaller works at the Vadehra Gallery in Defence Colony. The collection is coherent, united by Sheikh’s instantly-recog­nisable, but always breathtaking, detailed style. Still, the show defies easy generalisation. That’s partly be­c­ause it spans 15 years and includes everything from small works, to video, to a walk-in installation. In fact, the show is de­fined by its plurality – a function of Sheikh’s tendency to draw on so many sou­r­ces: artistic, literary and, especially, religious. 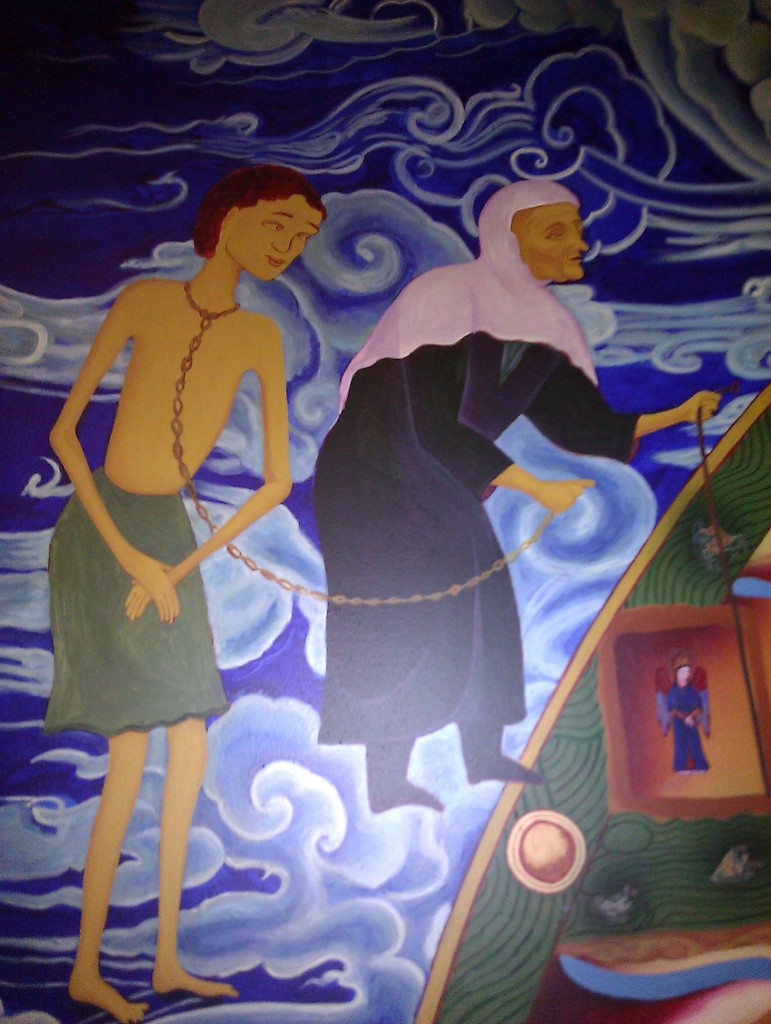 “I quote from everywhere,” he told us, referring in particular to Salman Rushdie, Amitabh Ghosh and Gabriel Garcia Marquez. Like Rushdie, Sheikh has always been a pluralist and a visual chatterbox, more int­erested in subverting religious identity with messy, mixed-up secularism rather than some abstract, anodyne idea of on­e­ness. Almost ten years ago, Sheikh began making accordian-folded books and small story-telling shrines, called kaavads. Tho­ugh kaavads are traditionally used to narrate religious stories, he seeks to tell the intertwined sto­ries of the secular world, to “ret­rieve the sense of the spiritual from organised religious practice, and transpose it to the realm of the secular,” as he wrote in an accompanying book. These smaller works tou­ch­ on the political (“Kaavad, Ayodhya, Mirage”, 2002-’04) and the personal (“Book of Memories for Bhupen”, 2005). Formally, these shrines re­p­resent the shelving away of memories, to be looked at later. “At another level, it is a site for at­o­nement, for innocent victims of the senseless violence of our times,” he wrote. “We can open these ‘boxes’ ag­ain and again to look at and remember the ter­rible acts that mankind has committed. I hope they allow room for reflection, even contemplation.” 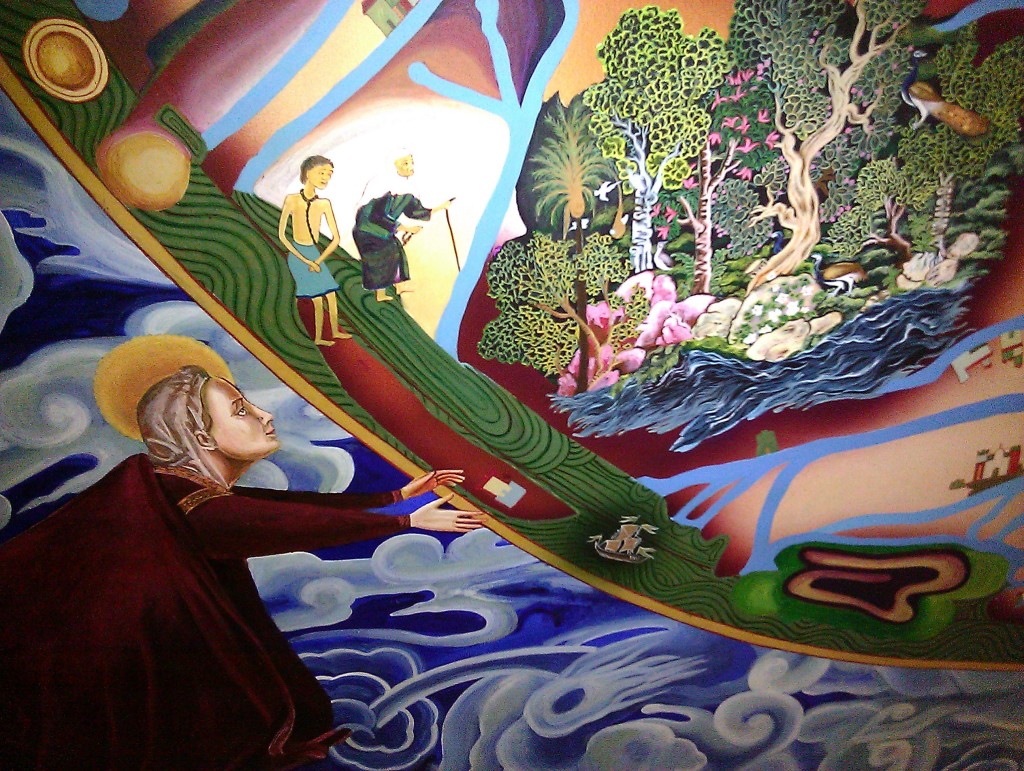 Sheikh is an unflin­ching, but subtle, illu­s­­trator of the violence that religious division can cause. One of the large works, “City”, brings together religion, my­th and reality particularly well. Six panels plus a semicircular flo­or piece show slant-perspective views of houses based on aerial Google Maps of Vadodara. The gro­und also has raised papier mâ­ché bui­l­dings, with gh­o­st-like busts and bodies rising out of them. The piece, which was created for a group show of Indian art in China (to coincide with the Sha­nghai Expo last year), is sub­titled “Memory, Dreams, Desire, Stat­ues and Ghosts; Return of Hiuen Tsang”. 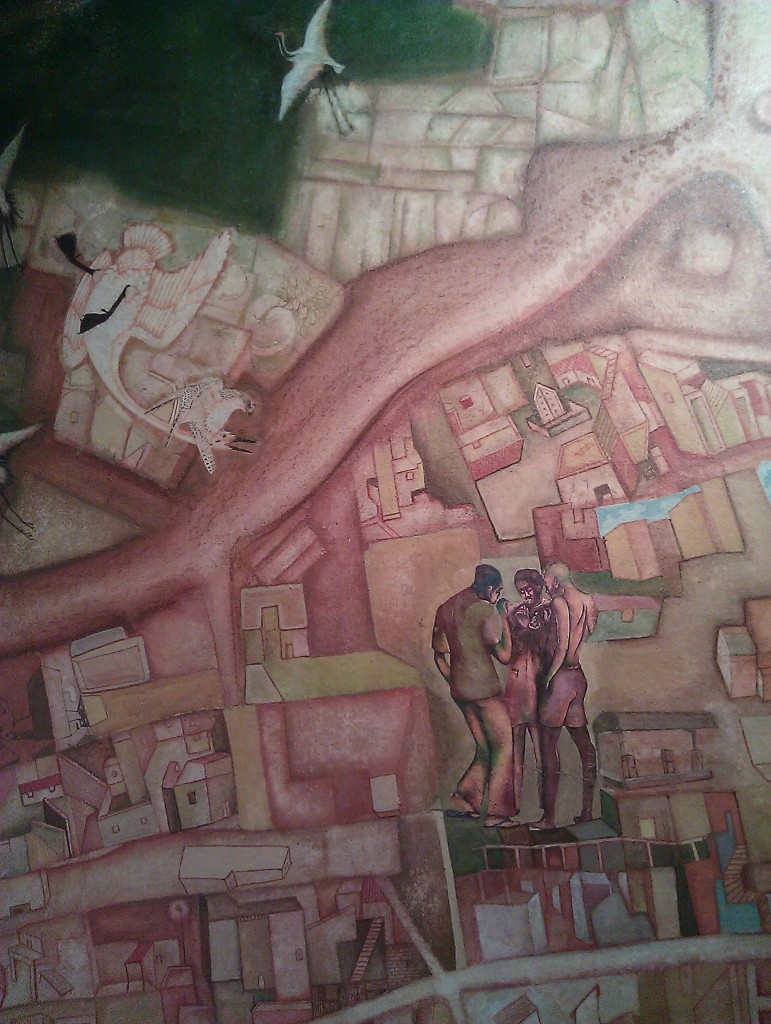 Hiuen Tsang, or Xuanzang, was a pilgrim who visited India, to get Buddhist scrolls,” Sheikh ex­p­lained. “I imagined him visiting again. Perhaps he has come back to return the scrolls. The image of him in Chinese traditions is a man walking along with a huge pack on the back, so he looks like a modern backpacker. Vadodara also has a Buddhist connection – there was a stupa discovered here where they found the ashes of Lord Buddha preserved – it was in ruins, but the ashes were preserved. So there is enough reason for Hiuen Tsang to come and pay tribute to ash­es.” Sheikh gently spins a story aro­u­nd his home city, but the eerie pa­p­ier mâché figures suggest an undercurrent of violence that can erupt as a riot at any moment – or perhaps the ghosts of those killed by such violence. The “City” is also populated with the usual craftspeople of an Indian town, “images of people who make little repairs – to your cycle, your shoe, your umb­rella,” Sheikh pointed out. “After 2002, the city has had to recover from traumatic events; it shows pe­o­ple who remake, repair the city.” Possibly, the Chinese pilgrim believes that returning scrolls that preach tolerance and non-violence would help the city heal in other ways too.

The centrepiece of this exhibition, a walk-in kaavad, could also be seen as a place to heal. Titled “Home”, the 34-panel mixed-me­d­ia work turns the idea of a por­t­able travelling shrine on its head, turning it into a secular place of wor­ship. The digitally-manipulated paintings range far and wide, from east to west and outer space to un­d­ersea. In the accompanying book, Sheikh wrote that “I’d been thinking about doing a shrine one could walk into ever since the first one… If you wanted to invite a world sangat, where would you find space for all of them to sit? It could only be in your heart, in your own en­vironment, in your home.” There is place for sufis, seers, even skeptics here. No matter which map you use to get there, you’ll be awed by – and welcome in – Sheikh’s “Home”.