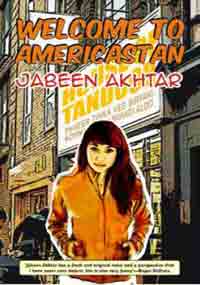 Samira Tanweer just wants to be left alone. Unfortunately for the former political analyst, being back in the bosom of her Pakistani-American family isn’t going to make it easy for her to put back together the pieces of her recently shattered life.

Samira indulges in a fair amount of wallowing, before succumbing to the demanding force of her parent’s love. The book threatens to overflow with Samira’s claustrophobic cultural baggage and self-pitying tears (she’s landed herself on the FBI terror watch list for att­empting to run over her two-timing ex). Her confessional passages sound awkwardly authorial, but what kept us reading was Akhtar’s knack for poignant scenes and conversations, which knock stereotypes satisfyingly out of focus.

Akhtar also manages to press all this tragedy into the service of comedy. Using both wry and warm humour, she sends Samira through a redemptive cycle from loathing to self-deprecation to sanity. Along the way are witty encounters with the inhabitants of Cary, North Carolina: discount store racists and apologists, alcohol-drinking Muslims and overly affectionate cousins.

Akhtar occasionally veers tow­ards purple prose and the novel seems to hang between multi-culti coming-of-age story, chick lit and dear diary. Yet, while Welcome to Americastan might not have the plot twists of Zadie Smith’s first novel nor the magical realist ambitions of The Brief Wondrous Life of Oscar Wao, its lack of pretension make it worth all the woe.