While Gieve Patel’s Clouds and Skulls come across as simple studio sketches, his Wells offer a meditative exploration of the natural world ♦ 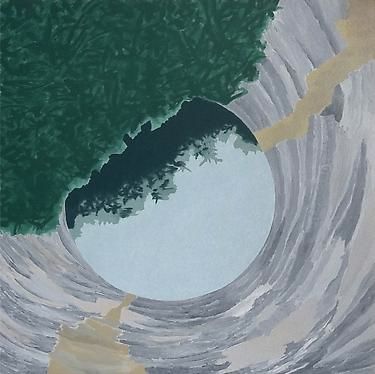 Over the last four decades, Gieve Patel’s work has turned inward. Wells Clouds Skulls, his solo at Bose Pacia Gallery, Brooklyn, from the 5th of May to the 25th of June, displayed this shift from narrative works (street scenes inflected with social comment, among others) to more reflective and layered works.

The three 8’ x 8’ canvases captured Patel’s impressions of looking into wells. These paintings were the latest from an ongoing series that spans over twenty years. The restricted space of Bose Pacia made for an intimate encounter with these large canvases, forcing the viewer to see them in close proximity, thereby mimicking the feeling of peeping down into a well.

Among the paintings, “Looking into a Well: A Spray of Blossoms” (2010) has lighter hues as compared to the other paintings. The exterior of the well, done in muted dove-grays mottled with green, is dull compared to the circular reflection of the sky at the centre-right of the picture space: it has a playful composition in robin’s egg blue with floating pink and mulberry shapes that suggest flowers. However, a hanging creeper with red and orange flowers at the left catches your attention. The ambiguous boundary between the exterior and the interior is crucial to the draw of Patel’s wells. In this painting, balance is achieved through the relationship between colours: a black border creates a sharp division but doesn’t entirely block the space outside the well. The eye goes back and forth between the flowers on the left of the painting and their reflection inside the well. 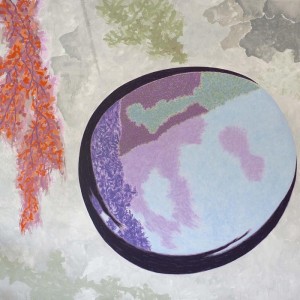 “Looking into a Well: Bougainvilleae” (2010) is a dark green canvas with a slightly unbalanced, upside-down composition consisting of clearly demarcated concentric circles with a blue-white, moon-like reflection of the sky in the centre. Pale, almost translucent roots, creep around the stone edges, which fade into a textured patchwork of dots and crosses. During a gallery walk-through, Patel mentioned that he enjoys the freedom that acrylic provides, and his pleasure in layering the work is evident here.

In “Looking into a Well: The Green Bush” (2008), the topsy-turvy composition creates an instant feeling of vertigo. Chromatically, this is the simplest painting (blue, green, gray and brown). An ochre seam in the shale-like layers of rock diagonally bisects the canvas. This particular well’s reflection is the brightest and it looks almost mirror-like with crisp, sharp borders. The ocular sky gives it a strong presence. With the dark reflection of the overhead foliage creeping into the blue, the viewer expects to see her own face looking back up.

During a conversation with poet Ruth Padel at the gallery walk-through, Patel said that he had once painted the reflection of his own face. But finding it intrusive, he wiped it out. While the well paintings invite conclusions about inner versus outer spaces, reflectivity and meditation, Patel seems to shy away from too much interpretation.

The series of drawings in charcoal, ink, pencil and pen titled Cloud similarly evades meaning. Executed with scratched lines that coalesce and dissipate on the page, the 17 works seem to avoid recognizable forms. The more pleasant of these look like mountainous landscapes while others look like iron filings scattered across the paper. Apparently, Patel works on a few of these pieces at a time, marking lines on each page every day. He mentioned that this way of working gave him an “immense sense of freedom”.

As an accomplished artist, poet and playwright (and a physician), Patel has certainly earned the right to his artistic freedom. However, one hopes he recognizes this freedom as a by-product of his earlier success. Displayed in simple wooden frames, these line drawings seemed included in this show by grace of Patel’s more effortful and relevant work.

Similarly, the Skulls would, in any other context, have been considered simple studio sketches. Against the white of the page, each skull is executed in a mix of gestural lines, shadowing and detail – too loose to be the anatomical drawings of a medically trained hand and too generic to bear the stamp of Patel’s style. At the gallery, a jumble of cloud drawings was bookended by one skull with a slight grin: a full stop punctuating the frivolity of the scribbles before it. Patel is a sincere rather than a sarcastic artist, and it is doubtful that this skull mocks the earnestness of his viewers. Unfortunately, an alternate explanation for displaying these works – other than as fillers for the otherwise excellent show – remained elusive.