Subodh Gupta greets New Yorkers with A Glass of Water ♦ 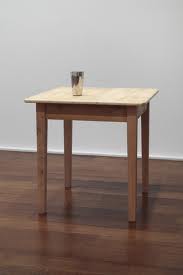 Subodh Gupta’s stainless steel glass, filled to the brim with water, created quite a splash in New York. This isn’t surprising for an artist who is often referred to as the ‘Indian Damien Hirst’ in international circles. What is surprising, however, is that Gupta’s show, titled A Glass of Water, at Hauser & Wirth from the 5th of May to the 18th of June, was most notable for its subtle, quiet tone. While Gupta’s sculptures and paintings show attention to detail, rarely are his exhibitions completely devoid of shock value. Rather than hitting the viewer over the head with the proverbial saucepan, this time, Gupta let the meanings in his work emerge more slowly.

Take, for example, the show’s title work. The ubiquitous stainless steel glass was placed on a wooden table and filled with water each morning till it almost overflowed, creating a convex meniscus. In its simplicity, this one glass, compared to Gupta’s earlier towering sculptures of pots and pans, spoke volumes. The tension between abundance and waste elevated this installation – a common marker of Indian hospitality was transformed into a work of art.

This show had several examples of huge sculptures that were basically enlargements and embellishments of quotidian objects. “Mark off”, a large, looped measuring tape in bronze, and a giant untitled bronze button were imports from the tailor’s shop. Two other sculptures resembled found objects – “Repose”, a blown-up, stainless steel sieve and an untitled, over-sized oil lamp in steel and copper.

These sculptures were imbued with Gupta’s sense of humour – again, it was more subtle here than in his previous works. In particular, “Mark off” poked fun at itself – a giant measuring tape, its precisely etched centimetric increments were scale-wise completely inaccurate. Its gently folded, burnished surface, punched with holes, mimicked an actual measuring tape.

The mottled bronze button was 1.4 metres in diameter and slightly squashed. It had a strong tactile appeal and the style of its casting was closer to a corpulent Rodin nude than a giant Oldenburg object. The broken oil lamp too invited the viewer to touch it or climb onto it; its dented surface and damaged parts suggested a long, eventful history. 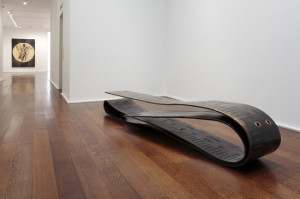 Gupta’s gift of breathing life into inanimate objects was evident in “Repose”, a battered sieve, which despite its well-worn state, was balanced in a position that approximated the recline of a lounge chair. Gone were the shiny milk pails and tiffin boxes that populated Gupta’s earlier shows, which had coincided with the glory days of the India Shining campaign. One can’t help but wonder whether the artist believes that the optimism of Brand India now seems a bit tarnished.

Grime and use were also evident in the oil painting “Full moon”. Consisting of a white dinner-plate-like orb with assorted dirty forks set against a smoky black background, the painting was an ambiguous play on words; it suggested a pun albeit not a literal one.

The exhibition’s other large oil painting, an untitled work, was a close-up of a couple of balls of dough (“Atta”), one of which was stretched out to reveal its bubbly innards. The detailed painting, which looked like an example of a foodie’s macro-lens photography, tied in nicely with Gupta’s “Atta” sculpture. The work seemed like the bread complement to “A Glass of Water”; on a wooden table, flour covered a lump of what looked like dough. On closer inspection, however, it was revealed to be a lump of bronze.

Fake reproductions, trompe l’oeil and visual puns are Gupta’s stock-in-trade. As with Hirst, part of the uneasy appeal of his work is the realisation that the viewer may not quite be in on the whole joke. As before, Gupta’s elevation of objects of daily use to the status of art seems to speak to the widely disparate levels of consumption in society – from the consumption of a glass of water to that of dough. Gupta’s A Glass of Water proved to be very refreshing, especially, since it offered the viewer the subtle pleasure of teasing out these meanings.