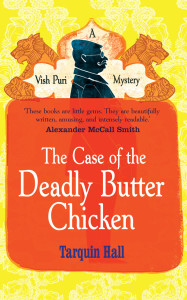 For the third of the Vish Puri mystery series, journalist and author Tarquin Hall dispatched the Punjabi private eye far from his Khan Market office. Hall met Sonal Shah at Khan’s L’Opéra patisserie to chat about The Case of the Deadly Butter Chicken.

Did you set out to write so much about how Delhi has changed?
The whole idea is to show India today. Obviously Puri lives in Delhi, I live in Delhi, so this is what I’m familar with. In my lifetime, London has changed dramatically, so has New York. But Delhi’s been through unbelievably rapid change. I mean people go on about ‘Khan Market has changed beyond all recognition’. It hasn’t really. Here you’ve got croissants and these little meringue things that sell for like R500 each, but the pavements are still the same. I came by the other day, and there was a Dalit going down into a sewer. The market behind hasn’t changed at all. You’ve got this new version of India bolted on to all the older versions. You only have to have Vish Puri walk through Khan Market and it’s there.

When Puri travels to Pakistan, it’s almost like a throwback to an older India.
I wanted to do a story about a Pakistani murdered in India, and I wanted the backstory to be Partition. I first went to Peshawar when I was 19, to travel with the Mujahideen. When I was in India in the mid-’90s, I used to travel there quite often, by air. I decided Puri would go overland, because he hates flying and it would be int­eresting to have him cross phy­sically over the border. So I had to go do that last May. It was incredibly poignant – I had tears in my eyes. But I had to do it through the eyes of a 52-year-old chubby guy. It’s interesting to travel like that; see things his way. The Pearl Con­tinental in Ra­walpindi, where I put Puri – those hotels in Pakistan are just like the Taj used to be or the Oberoi here. They haven’t been all swankified. It reminded me of India in those days – everything’s slightly musty-smelling; you sort of felt nostalgic.

There’s always a nice pitter-patter about what Puri is eating. Are you a glutton like him?
I try not to be. We eat at Colonel’s Kababz a lot. But I don’t think you can have a Delhi Punjabi detective without him being a foodie. Some of these new restaurants though, you get sticker-shock from. Puri would probably find the food too overpriced  – he’s a bit of a chicken frankie man and that generation doesn’t like eating in restaurants that much. We went to – is it Floof? Ploof, in Lodhi Market. It was great, but, my god, the bill! Given what the majority of people are living on in this country, you can’t help but think about that.

It’s something you contend with in the book as well…
There’s this huge disconnect – we had it yesterday. Our children’s ayah had been coming for the last week with this bag [of laundry] everyday. Apparently, half of Delhi hasn’t had water for about a week, because some pipe burst. And you know, we’re going to Floof, Ploof, whatever – floofy floofy – you know, eating our pork chops.

You’re already working on the next Vish Puri book?
A lot of it is set in rural India, which I haven’t really sent Vish Puri into yet. The main plot is about a couple from different castes – one Dalit and one upper-caste – who want to marry, from rural UP. And meanwhile, [Puri’s mother] and a whole bunch of the family go on the Vaishno Devi pilgrimage, which I just did a few weeks ago. It’s fun doing that stuff and putting it in these books.

You seem to have a lot of fun with the subplots…
In India there is always a lot going on. Every shopkeeper’s serving five customers at once; every bus­inessman is answering three phones. So a private detective always has god knows how many cases. Like with the whole Surat [subplot in Butter Chicken]. I want to do a whole piece about diamonds. The Angadia couriers are just phe­nomenally interesting. I was there for a few days, and I did go and talk to a couple of them but they’re really guarded and secretive. I would like to go back and do that story. All these indigenous systems and ways of doing things are just extraordinary. When I come across something like that, I’ve got to get that in, it doesn’t really matter how. So the plot has to be secondary to work with that, which is probably a mistake. I like to think that my plots are getting better, but then I never thought I’d be writing detective fiction – I was a journalist. When I started, I just thought I’d write about what I’ve seen, and there should be some kind of plot. Which I don’t think is how Agatha Christie did it.