Feeling a bit parched in puraani Dilli? Quench your thirst at these local institutions. Read the Time Out Delhi (July 2009) story as a PDF, find the text reproduced below, or download it here.

(Pairs well with this story on old Delhi street food.)

The thickest lassi we’ve found in old Delhi is available at this wellknown neon-yellow shop. Very much of the heartland, the lassi is served with a spoon and plenty of malai chunks. It’s also ice-cold and available in flavours like banana, jeera namkeen, mango and rose. Amritsari Lassi Wale has been around in Delhi since 1974 and is conveniently located next to a number of chhola bhatura walas. 295 Fatehpuri Chowk, at Chandni Chowk (2394-2260). Metro Chandni Chowk. Rs 8-20.

Compared to some surrounding vendors, this namkeen shop is a newbie, having been established only 27 years ago. That certainly doesn’t stop passers-by from availing of the shop’s convenient location in Dariba, just out of the sun of Chandni Chowk. A bucket of ice holds bottles of kaju milk, pista milk and badam milk. 255 Dariba Kalan, off Chandni Chowk (2328-1971). Metro Chandni Chowk. Rs 20.

Perhaps better-known for his fruit-and-cream sandwiches, Pawan Kumar at the Jain Coffee House also whips up some sweet milkshakes. Available in seasonal flavours, the whole milk shakes are frothier than the little-girl party frocks on Chandni Chowk. Mango, apple and coffee were the choices when we visited. Raghu Ganj, Chawri Bazaar (2391-8925). Metro Chawri Bazaar. From the station, take the main road towards Jama Masjid. You’ll walk past a big shop called Gujarat Namkeen Bhandar on your left. Watch for an iron gate on the left side that says Raghu Ganj. Go through this to a courtyard – JCH is on the left corner. Mon-Sat 9am-7.30pm. Rs 25. If you’re closer to Chandni Chowk, try Kamdhenu Family Corner, which has mango, chocolate and other seasonal shakes. 5469 Nai Sarak, corner of Chandni Chowk, opposite Town Hall (2394-4386). m Chandni Chowk. Daily 9.30am-8pm. Rs 20.

The crowd outside Murari’s lassi, dahi, milk and paneer outlet in Kinari Bazaar is relentless. Established about 60 years ago, the dairy stall uses two of Delhi’s classic “Sultan” machines to churn creamy – but not excessively thick – lassi in kullars and steel glasses. Some of the area’s merchants bring their own silver cups to be filled. A squirt of kewra is added and the glass is topped with a thin, creamy-crisp slab of malai before serving. A namkeen version is also available. 2178 Kinari Bazaar (2327-1464). Metro Chandni Chowk. Rs 20.

This neat little stall stocks shikanji masala powder, bottles of banta and neat little bottles of jeera masala soda. The concept is identical to Pandit Ved Prakash (see p38), but this stall is a little quieter, cleaner and almost next door. Nai Sarak. Turn left on Nai Sarak off Chandni Chowk and the stall is on your right. Metro Chandni Chowk.

This little lassi stall isn’t marked, but it’s across the road from a few others that are (Jain Bengali Sweets among them). What sets Pakodimal’s stand apart is his barfiwali lassi, in which a piece of khoya barfi is mixed in with the yogurt. According to food writer Rahul Verma, this stall might be one of the oldest doodhwalas in town. Sadly, the old man wasn’t there when we visited, and the barfiwali lassi had finished for the day. But we’ll definitely be back to try it. From Khari Baoli, turn left on Naya Bans and stop at the third or fourth stall to your left, opposite Jain Bengali Sweets. Metro Chawri Bazaar. Rs 15-20.

The Pandit’s progeny claim that their ancestor popularised the nimbu-soda banta. The family has been in the cold drinks line for about 150 years, according to Chinibhai, one of the brothers who runs the stalls in Dariba Kalan and near the Town Hall. Until the British introduced the Codd-neck bottle to India (it was invented by Hiram Codd in 1872), the family was in the sharbat business. In the early 1900s, they began focusing their efforts on banta, mixed with their own house masala. They also sell their own jeera masala soda. 5466 Chandni Chowk (2392-0931); 266 Dariba Kalan (2325-5259). Metro Chandni Chowk. Rs 7-9 per glass.

If, on a hot summer day, you happen to visit Harnarain Gokalchand’s murabba and pickle shop, you’ll be offered a cup of bright green liquid, with a scent like rain over dusty leaves. Khus (vetiver) sharbat is just one of the elixirs stocked at this store, that is now more than 70 years old. Though many of the murabba-achaar stores along the wholesale spice market stock sharbat, Harnarain is one of the few that still manufactures it. Of course, the manufacturing process has changed a bit since the shop first opened (it used to have a branch in Connaught Place as well). Though the line of sharbats is manufactured in the dusty industrial area of Lawrence Road and despite the fact that most of the ingredients listed involve preservatives, the objective of this implausibly coloured arsenal of mixers remains the same: to cool you down. The Arora family, which owns the store, manufactures bel, amla, kewra, chandan (sandal), khus and rose sharbats as well as mango panna – all priced under Rs 75 per bottle. Perhaps the snazziest sharbat line on the market, though, is the Shri Guruji brand, also available at a few shops in Khari Baoli. Founded in Kolkata in 1970, the company drew its inspiration from family patriarch Shree Jagdeeshprasad from Shekhavati, Rajasthan. The guruji is said to have once held a 16-day satsang, during which he served 16 different cold drinks. The company – now based in Indore – makes kesariya thandai; sharbats in flavours including badam kesar, chandan, kesar pista, kesar, khus, rose and “panchamrit” (intriguingly, the bottle only lists gulab, kewra, chandan and kesar: what is the mystery fifth ingredient?); squashes like amla, bel, jamun, lemon, lemon barley, lemony ginger, litchi, orange, and pineapple; and fruit cordial. Harnarain Gokalchand 6678 Khari Baoli (2399-2590). Metro Chawri Bazaar. Mon-Sat 11am- 8pm. Sharbat Rs 65-75. Ram Lal Om Prakash (For Guruji sharbats) 6542 Khari Baoli, Fatehpuri (2396-7853). Metro Chawri Bazaar. Mon-Sat 10am-7pm. Sharbat Rs 85-140.

Before Campa, there was kewra 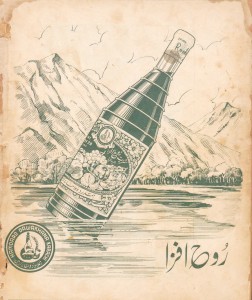 If Delhi can claim any drink as its own, it’s Rooh Afza. The sharbat, almost synonymous with sweetness in our city, has an intriguing family story behind it. In 1906, Hakim Abdul Majeed, a Unani medicine practitioner who had studied under Ajmal Khan, started his own clinic in Lal Kuan. The next year, he started selling bottles of the rose-red concentrate. His son, Hakim Abdul Hameed, expanded the Hamdard Dawakhana and popularised his father’s summer sharbat beyond the walled city. After Partition, his brother Mohammad Said went to Karachi to take care of Hamdard’s operations in Pakistan. The brothers kept in constant touch and the Indian and Pakistani companies grew together. They both set up universities and Said did a turn in politics as well. Eventually, he was assassinated and, within a year, his brother in Delhi also passed away. The company is still in the family’s hands, with Majeed’s greatgrandsons Hamid Ahmed and Asad Mueed working on revamping Rooh Afza’s image with Juhi Chawla ads and new jingles. The taste of the drink, however, remains the same, just as the Hamdard Dawakhana still stands as a major landmark in Lal Kuan. A lot of components go into that indescribable flavour: sugar syrup; pineapple juice and orange juice; extract of dhania, gajjar (carrot), khurfa (bara lunia or purslane), tarbooz (watermelon), palak (spinach), pudina (mint), hara ghia (luffa), kasni (chicory), munaqqa (raisins), sandal, khus (vetiver), chharrila (stone flower lichen), gul nilofar (waterlily), gaozaban (borage or starflower), citrus flowers, kewra and rose. Available at general stores across the city. Rs 90 for 700ml.

(Pairs well with this story on old Delhi street food.)