The market under the Defence Colony flyover is possibly one of the least savoury destinations inside the Ring Road. Just behind red and shiny Nirula’s, behind the thekas, men in banians guzzle beer and chomp on kababs at an Afghan chicken stop. We’re more interested in the other side of the bridge, however, where one of Lajpat’s premier street food vendors serves meat for four hours a day to a clamouring horde.

Amritsari Meatwala is a bit hard to find these days, because of Metro construction. Just follow the flies, turning left after the Metro boards into a gali sandwiched between buildings and the construction ditch. Turn right around the corner, and the elevated shop is to your right. Owner Narender Kumar sweats between two giant cauldrons filled with disintegrating brown meat mush; his minions chop onions and fling newspaper-wrapped potlis with plastic containers of meat at the outstretched hands of the customers. There’s a small seating area in the back as well. 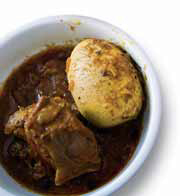 We can honestly say that if you can handle this meal, you can handle anything. About two-parts chilly-spiked desi ghee to one-part melted meat, the variations are simple: keema with meat lumps on the bone, keema kaleji and keema anda. (There’s biryani as well, but we ignored it.) We got a plate each of keema meat and keema anda, and several thick crusty rotis. The meat retains its heat for ages because of all the ghee. It’s also infused with cardamom, kali mirch, chilly and, we suspect, something of its creator’s essence as well. We especially liked the softness of the crumbling, cooked-through egg yolks. The curries would make a good addition to a boozy dinner party, but we’d recommend you get there early – the meat runs out faster at the stall than it does through your system.