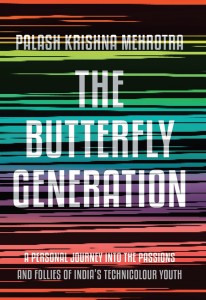 Form shouldn’t always mirror content. Palash Krishna Mehrotra’s musings on “the Passions and Follies of India’s Technicolour Youth” flit from subject to subject in short chapters, resting a moment on the bloom of homosexual rights (“Gay ho!”, eight pages), then on the thorny issue of morality policing (“V-Day”, seven pages), and off again to the rotten core of domestic arrangements (“Servants of India”, nine pages). Billed as “part memoir, part travelogue and part social commentary” (and also, unabashedly “one of the finest, most original works of non-fiction from India in years”), The Butterfly Generation is an attempt at diving, Gonzo style, into the world of Indians who grew up (or failed to do so) during the Liberalisation era. Mehrotra comes up with a cocktail of drug-and-sex anecdotes, deep thoughts and music reporting – and a fresh helping of the obsession with defining India that publishers seem to be unstintingly piling on their plates of late.

Like many of his fellow columnists and journalists who have published books, Mehrotra is an engaging, adept writer. He also has the intellectual advantage of literary parentage – his father is poet Arvind Krishna Mehrotra. This, his first full-length piece of non-fiction, has some fine linguistic craftsmanship. Mehrotra is particularly good at the ironic turn of phrase and well-timed notes of sarcasm and humour. He also has a knack for collecting bizarre stories and fascinating characters (Captain Andy, a pilot; Nandu, an auto-rickshaw driver with a penchant for porn). The problem is one of unfocused ambition: the pages flutter from college ragging to ecstasy parties, from smack-addicted call centre employees to stand-up comedians.

Possibly inspired by that other Rolling Stone contributor Hunter S Thompson, Mehrotra embarks on a project of literary journalism – he even mentions Gay Talese’s genre-defining piece on Frank Sinatra in passing. The book is divided into three sections: profiles, essays on social phenomena, and longer pieces on music and pop culture. Mehrotra does better in some of the longer chapters, in which he evokes his childhood in Allahabad, the joy of discovering rock music, and the influence of MTV. A contributing editor to the Indian Rolling Stone, Mehrotra began his career writing music criticism, and this book might have been far more compelling as an in-depth exploration of Indian rock and pop. The chapters on metal bands and other musicians are intriguing, but perhaps still too cursory for anyone somewhat familiar with the scene. As for the rest of the Technicolour social milieu, it’s a fair assumption that most of this book’s readers will recognise more than a few of the characters, whether or not they’re hidden behind perfunctory pseudonyms.

The book ends abruptly in the opprobrium of money and materialism. Mehrotra barely hints at what the future might hold for the butterfly generation – a metaphor that gets little attention beyond its bold typeface across the cover. This motif, at least, deserved a more concentrated effort. Or not.