The avante-garde artist performs and exhibits in Delhi ♦

This article is part of a cover story on performance art in India.

Yoko Ono’s artistic journey has been a strange one. When she became a household name, her avant-garde art became just one more reason for the mainstream media to vilify her. But as Dilliwalas are finding out, all that was a very long time ago. Ono recently performed “To India With Love” and inaugurated a show, Our Beautiful Daughters, in Delhi – giving the capital a first-hand look at why she is, and always has been, much more than Mrs John Lennon.

What marks Ono’s first working visit to India is not her celebrity status, but the fact that the show (which runs parallel to a retrospective, The Seeds) is a notable addition to the artist’s body of work – the latest in a number of polished exhibitions that have, since her first major retrospective Yes Yoko Ono (New York, 2000), increasingly ensured her canonic position in contemporary art. Ono’s India outing encompasses participatory work, film, performance, activism, installation and sound. Despite its breadth and celebrity shine, this event is a particular success because it channels the raw, off-key edge that has fuelled Ono’s work since the 1950s. 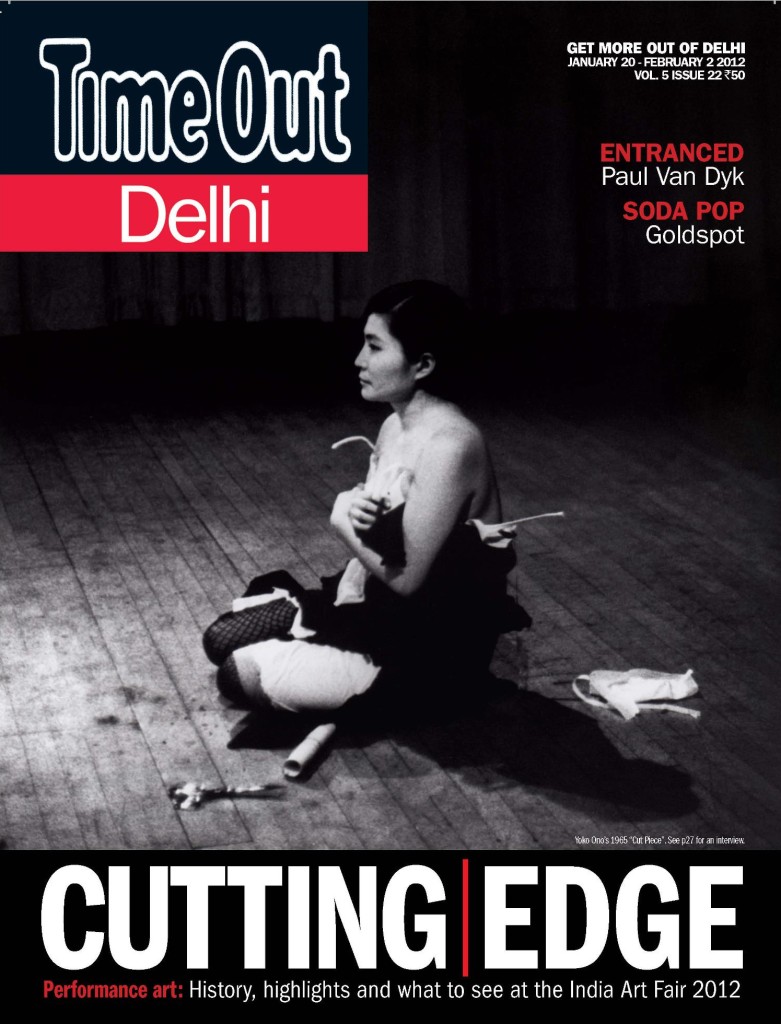 “My intent has not changed,” Ono told Time Out over email, before arriving in Delhi. Then, as now, “I was working without the concern of the size of the audience of my work.” That intent – to change the way people think – infuses everything she does: from haiku-length “instructions” to the 30-foot column of light that shoots up from Iceland’s Imagine Peace Tower – the 2007 fulfillment of a dream born during her first meeting with Lennon.

Besides these physical pieces, Ono’s most iconic work is “Cut Piece”, first performed in 1964, in Japan. Ono sat on stage while audience members cut off pieces of her clothes to create an intense interaction charged with violence and intimacy. Ono performed the piece several times, including at Carnegie Recital Hall. Depending on the audience, the show could be tame and polite or a threatening free-for-all. Ono downplayed the work’s importance: “‘Cut Piece’ and other performance I have done around then may have motivated some people to be less afraid of expressing themselves,” she said. But the work is a milestone in performance art: a riveting minimalist piece, devoid of the blood and gore that so many avant-garde artists use to grab attention.

That quiet wit, often leavened with puckish humour, is a quality Ono shares with others of her time. Around 1961, artists like John Cage, La Monte Young and George Maciunas coalesced at her New York loft, and the colla­borative creative space was instrumental in kick-starting Fluxus.

Collaboration has continued to be an important aspect of Ono’s work. Her shows are created as much by attendees following instructions as by Ono herself. (See Ono’s instruction postcard included in Time Out subscriber copies) One floor of Our Beautiful Daughters is dedicated to interactive pieces: “Mend Piece”, which involves fixing broken ceramic bowls; “My Mommy Is Beautiful”, an art wall to celebrate motherhood; “India Smile”, a photo booth that adds participants to the global Smiling Face Film; and others. There’s also a wish tree (one of 20 around the city), one of Ono’s most popular projects, in which people write and tie their dreams on a tree. We asked her if she was familiar with the Indian practice of tying threads around trees. She replied with a little story: “A very clever Japanese warrior of long time ago was asked by the lord to report how many trees were in his land. The lord did not think the warrior can do that. But the warrior brought the number very quickly. The warrior tied every tree with a string, and later took the strings off and counted them. I see the uncanny resemblance of that and the Indian practice you speak of. Do Asians have similar DNA? :)”

That response is vintage Ono: slightly off-topic, a little deflecting, but still seeking to connect through humour. The emoticon is typical too: An avid Twitter user, Ono tweets 140-character koan-like instructions, and answers fan questions every Friday. Social media hasn’t changed art, Ono said, “It’s the other way around. We performers changed the understanding of the social media. That’s what artists do.” Ono said new technology has made it possible to fulfill old, “farfetched” dreams (like the Imagine Peace Tower), but the dreams themselves haven’t changed.

These dreams, for Ono, have centred on promoting non-violence and addressing feminist issues. For India, she created a large installation “Remember Us”, a comment on the rules that bind women. “I wanted to share the worth of women of India with both women and men,” she said. Fifteen silicone female bodies, ranging in age and size and cast from real people, lie in segmented black boxes filled with coal. Three bowls of ash on the far end of the room stir associations with sati, or, less dramatically, cooking fires. At night, the bodies, which are soft to the touch, are covered by textiles made by Rajasthani women.

Besides the installation, posters in the style of the Ono and Lennon’s famous “War is Over! (If you want it)” advertisement, are up around the city. (See facing page for an ad created for Time Out Delhi.) As a committed peace activist in the last couple of bloody decades, Ono remains optimistic about art’s potential to change the world. Speaking about last year’s revolutions and protests around the world, she said, “The protests are performance art, with the intent of changing the world for the better. Don’t criticise. Enjoy.” In characteristic instructive fashion, she added, “We are at the point of stepping into the new world. Let’s not be negative about the fantastic vision we have of it. It’s time for action!”

At 78, Ono herself is energetically active, producing dance floor hits and travelling the world. Despite those who might dismiss her, she is the consummate survivor. The WWII bombing of Tokyo, the male-dominated mid-century art scene, marriage to the world’s most famous rock musician, the kidnapping of her daughter, and the murder of her soulmate – she’s lived through a lot. Yet Yoko Ono’s artistic strength lies in the universal concerns that echo through her work, transcending these individual experiences of suffering.