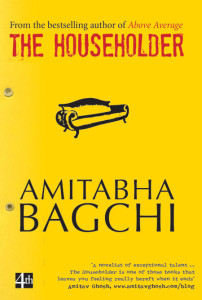 Naresh Kumar, the householder of the title, is having a little trouble holding his home together. As PA to a powerful Delhi bureaucrat, Kumar has a routine but tenuously balanced life that’s built, like a pack of cards, on years of under-the-table transactions, shady deals and missing papers. Now, his daughter is having trouble conceiving, his son is rotting away at a call centre, and his career is threatening to fold up following a mishandled deal.

Corruption is at the heart of this tight, nuanced novel – the second by Amitabha Bagchi, who also wrote Above Average. Questions of good and evil, and the shades of gray that power casts over actions, infuse the story of the Kumar family’s threatened fortunes. Bagchi masterfully captures the self-justifications and corrupt compromises that are a part and parcel of Delhi life – from throwing litter on the ground in the absence of a dustbin to sending a patsy off to jail for a murder.

Bagchi always privileges the story, however, letting moral questions percolate in the background. Characters may suffer self-doubt, but they remain consistent, believable middle-class Dilliwalas, for whom the primacy of power is self-evident. The nuance with which Bagchi draws out the dynamics of supplication is remarkable. For his characters, bribery and blackmail are simply necessary survival skills.

Particularly noteworthy is a subtle transition from Kumar’s brand of corruption, which justifies itself in the name of the holding a family together, to its new, post-economic liberalisation version: corruption in the name of individual freedom. But as old power systems figure out how to coexist with new ones and middle-class Delhi transitions from a family-first to a me-first mentality (forget civic responsibilities), there’s still room for a little tenderness in the relationships between couples, fathers and children. The plot’s solution may be a bit too neat for some, but the uncomfortable questions Bagchi raises refuse to go away.

Originally published in Time Out Delhi, 2012.