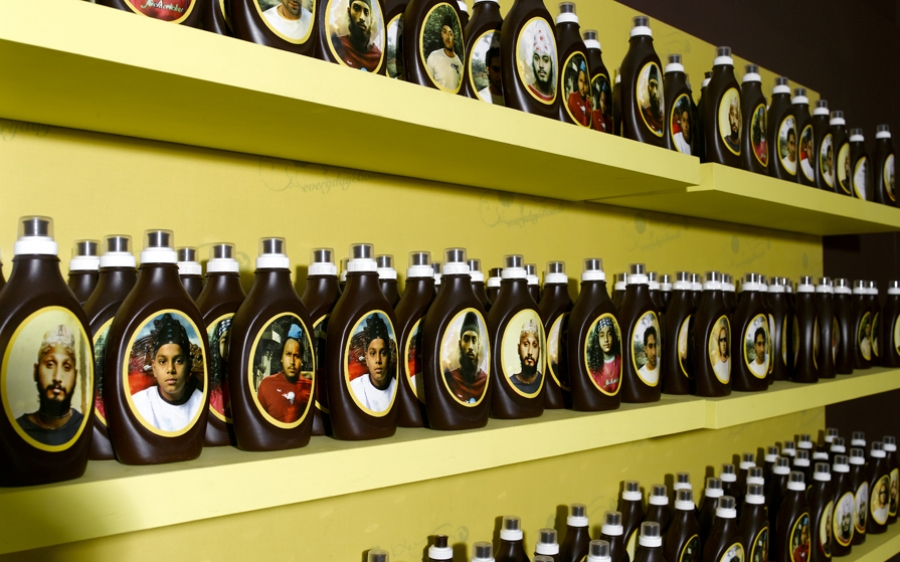 In the ongoing search to furnish India’s contemporary art scene with international emissaries, it is appropriate that two most prolific ambassadors have a background emblematic of the country’s most shining industry: advertising and design. Anything but appropriate, however, is the impish name of the fake brand that artist/designer duo Sumir Tagra and Jiten Thukral have invented – Bosedk Designs.

This cheeky attitude hides a pair of highly imaginative minds and two pairs of capable hands. Working in a variety of media – graphics, videos, music, interiors, products, paintings, sculpture and installation – Thukral and Tagra showcase design as high art. Yet Bard College curator-in-residence Trevor Smith writes aptly in a recent T&T catalogue that their engagement with design is “not one of distanced reflection or appropriation as is typical of visual artists, nor is it an academic critique of design.”

The artist/designer duo have had several major gallery shows, but also work in graphic and product design, including commissioned work – such as a 1”x1”x1” book titled David and Goliath – for companies such as Condé Nast, United Colors of Benetton and Ogilvy & Mather. Working collaboratively, T&T defy definition; are they artists or designers? Indians or global citizens? Dead serious or completely deadpan?.

What remains consistent is T&T’s almost branded style, straddled insouciantly between art and design. Their paintings – executed with the polish of digital prints – are stylized arrangements of stencil-like cut-outs, precise lettering and ornate embellishment. The question of whether these are backdrops for installation work, studies for projects or product overviews remains one for the critics. In Thukral and Tagra’s major shows, paintings rub shoulders easily with installation, seamlessly connected through content while varying in form.

T&T’s 2007 Everyday Bosedk exhibition at Nature Morte perfectly illustrated this easy coexistence. An exhibition that specifically built up the all-encompassing Bosedk brand and, in doing so, called into question the commercialisation of art and a commodification of style, Everyday Bosedk incorporated wall-size paintings, sculptures and a central installation. Upon entering, each viewer received a pin – a miniature version of an installation of chocolate sauce bottles (with questionably chocolatey boys on them) – forcing the spectator into interaction. Paintings like “It rains everyday” provided ample window-shopping with cookie-cutter figures engaged in various mundane and bizarre activities. But the centrepiece installation, “Keep out of the reach of children” encapsulated the uncomfortably satirical point of the exhibition. The gallery’s basement was transformed into a mini-supermarket – the whole venue branded to dizzying totality with neatly packaged, mysteriously multi-purposed Bosedk products. From bottles reminiscent of cleaning fluid to alcoholic beverages, the installation raised several important questions. Is this packaged seamlessness the real art-mart of India’s elated (perhaps inflated) art scene? Does the work’s title imply a condemnation of homogenization – a note of caution about the effect of dangerously attractive consumer culture on young children? By creating the illusion of mass-produced, monopolizing corporate unoroginality within an installation that was – given its galleried context – highly original, Thukral and Tagra have the last (albeit ambivalent) laugh.

The duo continue their political engagement in new projects, despite a certain self-directed irony. Peter Nagy writes in their catalogue that “Blinders are helpful when jumping into any fray… Most necessary [for artistic creation] may be an inert stupidity (in no short supply) against which to measure one’s own actions and intelligence…” The knowledge that world-saving may be arrogantly idealistic but better than doing nothing  at all underlay the pair’s recent “Put it on” exhibition at Bose Pacia, New York. The show handled spreading awareness of HIV/AIDS and condom use with witty delivery and a strong conviction in content. Whatever else they make think of themselves, Thukral and Tagra take their job as communicators seriously – coming up with underwear that promotes condoms, slippers with correct steps for condom usage printed on them, and a diagram, appropriated directly from market-strategy, of the moments during foreplay at which condom-awareness intervention through media is necessary. Extolls Nagy in the catalogue, “The Revolution will not only be televised but also commodified. The call to arms is to Personalize, Strategize, Sensitize, and Diversify.”

T&T’s latest show at Art Statements during Art Basel 38 – Adolescere – Domus – included works that spoke of more personalised touch, less evident in other, artistically aloof, pieces. In these and older paintings from 2004, the pair show up occasionally – not just as their cartoon avatars – but painted realistically if incompletely – a shoulder here, a pair of legs there. References to Delhi Public School, rotory phones and old-fashioned televisions curl up against iPods, bikinis and  self-portrait cartoons. These passing, pastiched icons are as close to self-explanatory as anything T&T have done. We’re in the thick of it, “deformed olive lover” and “skinny-kinky mind”[1] seem to be saying. We don’t care what you call us. We’re just having a damn good time. And then an echo of (canned?) laughter.

[1] Descriptions of Sumir and Jiten from their website www.bosedkdesigns.com