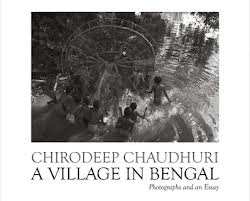 Twelve years is a long engagement for an artistic project. But by saving up his vacation, Chirodeep Chaudhuri (formerly Time Out’s national art director), managed to capture Durga Puja in his family village of Amadpur over just such a length of time. He chatted with Sonal Shah about putting together A Village in Bengal.

The black-and-white photos recall a pre-Incredible India approach to shooting the country. Why didn’t you shoot in colour?
When I started the project, since it was completely self-funded, black-and-white was cheaper. I was also working at the Sunday Observer, where I had access to a dark room so I would print free of cost. [Later] I’d set up a little dark room at home where I would be processing my films late in the night. All of this allowed me, in those early years, to keep costs down. Secondly, I don’t think in those initial years I was very good at shooting colour – it required a certain kind of discipline. It would have been a completely different book; none of these pictures would actually translate in colour. The time when Durga Puja happens, it’s a very odd time of the year, the light is very bad, very harsh. I don’t think in those days I had the requisite skill to pull off something of that nature in colour.

This also recalls the atmosphere of Satyajit Ray’s Pather Panchali, which you mention as an influence in your introductory essay.
The one very important aspect of this whole work was this sense of silence, which you encounter in that place. It’s very hard to describe if people haven’t spent time in rural settings of a certain kind – obviously you get used to it, but on that first day, when you get out of the station and you’re making your way out of the market on those kaccha roads and stuff, after a point this silence kind of hits you. I thought that was a very important aspect to maintain. Colour would have added a certain amount of noise to the overall mood.

And typically, images of Indian festivals tend to suggest noise and tamasha…
This is something which I have been accused of very often with some of my Bombay work: “Your Bombay pictures are too quiet”. In this case, this whole setting is quiet; it’s also a very slow pace. I would imagine at least a third of the pictures are of people seated. I don’t think that’s necessarily a misrepresentation, but it was done as a very conscious decision to create this ambience of slowing down of pace. In Calcutta, someone like my mother, I rarely see her sitting down. [In Amadpur] I would see them basically kind of lounging about.

There’s also an unposed intimacy to these pictures of people lounging…
The pictures I’d shot of my family in those early years – people were very self-conscious. Most people didn’t really know me. It would be like, you know, “He’s come on his little exotic vacation”. It took me a couple of years for people to accept my presence. Towards the later years, nobody gave a damn if I was taking pictures. Some of my uncles would be like “Kitna tu shoot karega? Har saal same cheez shoot karta rehta hai.” After a point, I was as much part of the regulars as a lot of others. One of my really favorite pictures is of my sister-in-law talking with my niece, and she’s kind of bent over – those kind of pictures, I don’t think I could have done them in year two, or year three.

There are actually three different stages where this whole story’s being played out. There’s the complete public space, which is the village: you’re seeing cattle, you’re seeing villagers. Then you’re seeing this kind of common private-public space, which is the thakur dalan – where people usually assemble at certain predetermined times for reasons of worship and all that. After that, people kind of go off into their respective houses and things. I started going into those more private areas in a much later stage. After year seven, year eight, people just stopped caring – this was the guy [who] would have his bloody cameras and he would go gallivanting into the village… it became a bit of a joke in the family.

And you carried on shooting in film?
Except the last year, when I shot digital, because I lost my entire bag of equipment and didn’t think it made sense to buy a film camera, given the way the scene had changed completely. The last year was really about tying up loose ends – so digital helped, in the sense that I don’t think I had any more patience to say “Oh shit, ye hua nahin, I’m going to go back 360 days later and just do that one picture.”

Will you keep up the yearly tradition of returning to Amadpur?
I don’t think this is going to go on for too long. Most people have kind of moved out of a milieu like this. If it was exotic for me, for the next generation it’s even more exotic. I don’t think they would really ensure that it continues. It would probably just die off for all you know, however terrible it makes me feel. I don’t see it continuing into the next generation, unless there’s something dramatic that happens. West Bengal tourism, in Calcutta, have this thing where they take tourists around to certain old family Durga Pujas. From this year, supposedly, our family Puja in Amadpur has been included. Now I don’t know what this means for the whole thing – does it give it a new lease of life? Does it turn things on its head completely and make it into something very crass? I mean, a busload of 30, 40 people just landing up suddenly, I don’t know what it would become.

Do you see another long project ahead?
Most of the ideas I work on are long engagements, relatively speaking that is. I can be very very obsessive about ideas once I’m on to it. I realised over the last two years that I was finding myself getting tired a little quicker, so I don’t know if I would be able to continue with this in the village for another 14 years now. Also, in the course of doing this, there was a lot of wisdom that was accumulated in terms of photography and understanding various things about narrative construction and things like that. A lot of the stuff I’m doing now would therefore come quicker. With that project it was all kind of meandering around and there were things which I was figuring out.

The meandering style does suit the subject.
It just seems like the most natural way that this project could have have gone off – I’ve been looking at this first copy of the book since it arrived –I’m questioning it myself: why the fuck did it take like 14 years? This could have been done during one Durga Puja…

Yes, but then you’d be out there with a shot-list – it’s refreshingly not savvy in that way.
There’s a huge amount of reflection which kind of happens in those intervening 360 days each year. The weird thing is that it’s actually been shot over 60 days over 12 years – so it’s actually the amount of time which a lot of photographers nowadays spend on their projects. But I think they don’t have the luxury of those in-between spaces which I had.