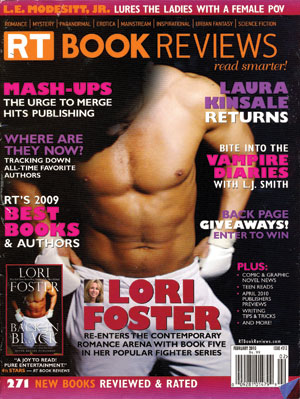 In a little brick building in Brooklyn, the offices of RT Book Reviews (formerly known as Romantic Times) are divided between two suites. In one, paperbacks and curios line shelves set in converted fireplaces, and against a wall painted with pink bows. A cozy room with plump sofas leads to a sunny back garden with a trellis and wrought-iron furniture. On the other side, a handful of editorial and design staffers sit at luminous outsize Mac screens. Cover proofs are tacked to a steel filing cabinet, above which a poster of Fabio cuddles up to a cut-out of Botticelli’s Venus. A neighbor’s black tabby wanders between the cubicles.

Like its home, the magazine successfully mixes its down-to-business edge with the somewhat chintzy feminine world that nurtured it. RT has undergone many changes in format and content over its 29 years. But, at heart, the magazine remains a source for romance fiction reviews, connecting readers of the genre with the books and authors they admire.

Romantic Times was founded in 1981 by Kathryn Falk, a romance novel enthusiast from Michigan who moved to New York as a young woman, eventually succeeding as a dollhouse hobbyist and shop owner. Falk recognized a need for order in the chaos of purple publishing and wrote Love’s Leading Ladies, a book that grew into Romantic Times. Falk appears to be a cross between a heroine of one of the novels that she loves and the stereotype of the lonely woman who loves to read them. Now “sixty-something,” she has been romantically linked to a Swiss film actor, an Indian maharajah and a Brooklyn plastics manufacturer, finally getting married last year. She owns homes around the world and an English title; her kitschy MySpace page introduces her as Lady of Barrow and lists her interest in “Psychic/Mediumship.”

Her Romantic Times was the first publication to take pulp or “genre” fiction seriously. What began as a 24-page spot color newsprint publication is now a monthly 130-plus page glossy, with a circulation of 70,000, about 50 percent of which is subscription. Publisher Carol Stacy, who has been at RT since 1984, said, “There’s a tremendous pass-along with our magazines. There are bookstores that order one subscription for all their customers to look at, reader groups and writer groups. Not to mention friends and mother-daughters.”

RT reviews more than 270 books every issue and now covers not just romance but also mystery, paranormal, erotica, inspirational, urban fantasy, science fiction and other genres. Falk’s editor’s letter is chatty and usually includes references to recipes and social events. While the feature sections are cheerful and a little chaotic — with dancing typefaces and multiple color palates — the chunky review sections in the middle of the magazine are standardized monochrome and organized by genre. The reviews are contributed by a satellite army of 50 freelancers.

A female editorial staff writes the features: trend stories, author interviews, polls and discussions about writing techniques and breaking into the industry. The exuberant tone of most articles implies that RT is written for and by insiders. “I hire people who love books. That’s part of the prerequisite,” said Stacy.

Besides producing the magazine, RT stages an annual convention, a glittering affair that takes place anywhere from Orlando, Fla., to Cleveland, Ohio. Any budding author or eager reader can attend, providing they can pony up $485 for registration, plus the cost of travel and board. A thousand people do so, and some, Stacy said, “save all year and take their one and only vacation” to attend workshops and mixers, “fairy balls” and male cover-model pageants. The magazine also organizes author appearances in bookstores.

In addition to knitting together its readers with such events, RT has also embraced a changing market. For the first decade or so, the magazine focused exclusively on romance novels. During the ’90s, covers were often simply reproductions of the book of the month — kitschy paintings of swooning women and swashbuckling men. As detectives and corporate criminals, as well as angels and vampires, began to creep into romance readers’ diet of books, Romantic Times incorporated these other genres and becameRT Book Reviews.

The magazine has become a reference for the publishing industry as well as a cataloger of it. “We can track trends from a unique perspective because we’re in contact with all authors and publishers,” said Stacy. According to her, publishers “go shopping” for authors in RT.

The symbiotic relationship between publishers and the magazine is well evidenced by large blocks of book ads in RT. This dependence on book advertisers inevitably raises questions about the integrity of RT’s reviews. They are typically positive, tending to be milder and generally more sympathetic than the droves of snarky reviews that now can be found online. Stacy said RT does this purposefully. “We’re trusted. You don’t know who the [online] reviewers are. A lot of them just want to be mean. We’re more interested in being a guide for the reader.”

While it might benefit from being a bit more stringent with the stars it awards in its reviews, RT is clearly a comfortable home for those who love to read about love.