To market, to market ♦

The Defence Colony sabzi and phalwalas are a sonorous lot, with strength in numbers and vocal prowess. Mornings sound like an episode of “So you think you can hawk?” or maybe the opening song of a kitschy musical: a dim-lit stage, the low murmer of doves, the plaintive refrain of a lone hoopoe. A faraway train whistle; the muted strains of azaan. A piercing cry of “kabaadeeeya” breaks the stillness, followed by a soaring “sabzi-loa!” on C-sharp, then the emphatic litany of “Seblo, papitelo, santrelo! Anaarlo, kelelo, rasbhari-loa!” Even the most glottal-voiced sabziwala projects with confidence, demanding rather than entreating us residents to buy his wares.

Despite the enticement to come out and pay, I prefer to lie in bed, in lazy contemplation of the cartfuls of kharboozas passing me by like the morning sun. “Come buy my fine wares,/ Plumbs, apples, and pears./ A hundred a penny, In conscience too many,” wrote Jonathan Swift in a series of “Verses Made for Fruit-Women”. One can indulge in the projection of the sentiments expressed in this early 18th-century doggerel onto the modern-day phalwala: “My children are seven,/ I wish them in Heaven… Not a farthing will gain them, /And I must maintain them.”

This is rough verse, but some fine lines have been inspired by fruit and veg, and for some reason my weekly round of produce shopping seems to put me in a poetical mood. I’m sure the seths can sense my inexperience with matters of home economy as I meditate for minutes, plastic basket in hand, on the worthiness of a head of lettuce, the dust-coated beauty of a ruby red beet. I wonder if the cabbage knows, he is less lovely than the Rose? 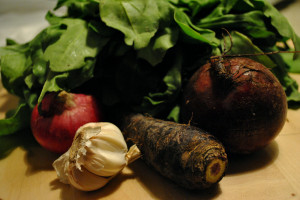 Defence Colony’s Pindi Store and its Khan Market clones are deceptively beautiful dens of thieves, with their glossy baingans and out-of-season mangoes, their shelves of forbidden foreign fruit. I linger amongst the tubers, am lured by the lushness of the leafy saag, half-recalling poems. “Every fruit has its secret,” wrote DH Lawrence, erotically obsessed with the fissures of the “glittering, rosy, moist, honied” fig, the“gold-filmed skin” of the “Oh so red” pomegranate, and the “lovely, bivalve roundness”, the “suggestion of incision” of the velvety peach.

The maal here is almost worthy of Christina Rossetti’s “Goblin Market”, which never fails to make me salivate at its “plump unpecked cherries, melons and raspberries”; “figs to fill your mouth, citrons from the South”; “pellucid grapes without one seed” and “melons icy-cold”. Tempted, like the poem’s two little girls, I briefly handle an asparagus bundle, then, balking at the price, I put it back. I glance furtively at the dragon fruit and guiltily fondle a crisp Fuji apple. Do I dare to buy a peach? They are rupees one hundred fifty, each to each.

On one visit, I ran into a family friend and longtime Pindi patron, who admonished the shopkeeper – “Yeh hamari beti lagti hai” – and I was duly given the family rate. But typically, I slink off to the Safal down the lane, where I dig for spuds and “The cold smell of potato mould, the squelch and slap/ Of soggy peat, the curt cuts of an edge/ Through living roots awaken in my head.” Like Seamus Heaney eulogizing his father, I too think of my forebears – not rooting around in the dirt, but, jhola on arm, queuing up at the sarkari sabzi depot.

Lately, a bit disgusted with Safal’s indolent swarm of fruit flies and flaccid spring onions, I caved at Defence Stores and purchased a couple of those attractively packaged and fairly affordable HUMM Marketing Consultants veggies that have been cropping up at kirana stores all over the city. Vaguely reminiscent of Ikea home accessories in name and sterile aesthetic, these cute little individually priced packs are an example of the ever-more creative ways Indians are using plastic despite bans on polythene, as well as catering to smaller urban households. But the mess of onion skin, carrot peels and Styrofoam in my dustbin was guilt-inducing enough to swear off a repeat purchase, at least until the company finds a less wasteful way to parcel up their goods.

I felt less remorse at trying out one of the capital’s farm-to-door organic produce deliveries not long ago. The company delivered admittedly jewel-like sabzi: nimbus and tinda and moolis, nestled in a crate that they took away again. Who could imagine we’d one day be able to order karonda online? Still, the most fulfilling vegetable harvesting experience this season has been the flowering and fruiting of a row of pots I planted on my terrace this winter. The “broccoli” sprouts from Sundar Nursery turned out to be unruly, purplish gobhi – more flower than cauli – and the baingan is only now putting out its soft mauve blossoms; but each morning, as the sun burns off the latent wisps of fog and the final calls of the sabziwalas fade away, like Walt Whitman, triumphant, you shall see me showing a scarlet tomato.