Setting out to rediscover Calcutta, Amit Chaudhuri rejuvenates the genre of city writing ♦ 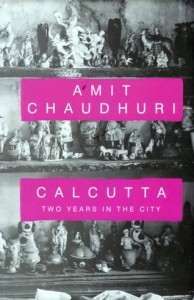 Cities have been the incubators of literature since at least the time of Plato in Athens, or of Kabir in Kashi. In turn, they have also played muse, inspiring an entire metropolis of fiction and non-fiction that attempts to describe them. There are towering landmarks of writing about the city: the poetry of Baudelaire, Walter Benjamin’s philosophy and architectural criticism, Edith Wharton’s novels of manners, the entire semi-journalistic oeuvre of writing modern New York, and other literary edifices on large and miniature scales.

Amit Chaudhuri’s Calcutta: Two Years in the City is an ornate yet understated, brickby- brick addition to this literary landscape. With the slightly indulgent self-assurance of an author with several acclaimed books under his belt, Chaudhuri sets out to look for the cracks in the patina of the Calcutta of his childhood imagination (a portrait he’s already painted in some of his novels). The authorflâneur walks the physical city, but also strolls down the avenues of thought that branch off from his observations and encounters. These range from the Chandan Hotel roadside eatery – a “kind of aberration from the street I knew”, he called it in an interview with Time Out – to meetings with politicians, Italian chefs, aging bhadralok, beggars and others. Like Iswar Gupta, who Bankimchandra Chatterjee is quoted as calling the “poet of what’s at hand”, Chaudhuri magnifies concrete details: the prawn cocktail at Mocambo, the Chinsura oils in Aveek Sarkar’s dining room. A meditation on Calcutta’s ubiquitous green French windows, for example, carries him through an entire chapter.

Chaudhuri’s style of spinning the particular and the personal into complex musings on society and history is resolutely modern. In his long sentences and looping chapters that cast forth on a topic, then reel it back, he reflects Calcutta (“India’s most tolerant, multicultural, multireligious metropolis,” he writes) as a quintessentially “modern” city. Chaudhuri’s concept of modernity is inspired by Baudelaire’s “The Painter of Modern Life”, and he writes, “By ‘modern’ I don’t mean ‘new’ or ‘developed’, but a selfrenewing way of seeing, of inhabiting space, of apprehending life.”

Through the city, Chaudhuri stalks and sketches the legacy of this self-renewing way of seeing, blending dissections of genre with contemplations on urban change. There’s a nicely confusing passage in the chapter “A Visit”, as he travels north to the old town, in which the direction of his thoughts and his physical trajectory merge: “Tagore began to perform a similar innovation with the Sanskrit poet Kalidasa, and with that same Upanishadic tradition, from the 1890s onward: to regard them not just as ‘our great tradition’, as dead heritage, but as essential to fashioning the modern poem and literature.

“We’ve lost our way. Where exactly is Shobhabazar? We’re in Shyambazar, lurching forward steadily in the congestion – Dada, in which direction is the Naba Jiban Nursing Home? And, excuse me, Dada, did the Bengal Renaissance really happen? Could you point out its signs?”

Yet Chaudhuri’s endeavor in this book is not to restore, with the filler of nostalgia, the cracks in that old Calcutta, “one of the great casualties”, he writes, with the “death-knell” of modernity in the 1980s. Focusing loosely on the two years leading up to the 2011 West Bengal elections, if Chaudhuri does dwell on the literary, architectural and human vestiges of the city’s past, it’s because these are the peeling edges of the cracks he wishes to peer into – to rediscover his city in the age of globalization. “In this book, I decided there’s a reconfiguration taking place in my imagination through all these places that I’m visiting or interacting with,” Chaudhuri told us, “starting from the anecdote about the homeless woman at Sealdah Station.” The anecdote is a small encounter between this woman with no address and the poet Utpal Basu, himself an old Calcutta figure, who relates the story to Chaudhuri with the assertion that “These are our citizens” – spurring a recognition, Chaudhuri said, of “initial disconnect” and then a desire to “explore the nature of that connection” between the new, fractured, globalizing Calcutta and the city he once understood.

This exploration has some similarities with that other modernist sympathiser Orhan Pamuk’s Istanbul: Memories and the City, though it is less dramatic and less personal. While Pamuk wrote himself at the centre of his book, Chaudhuri too is a character in his narrative. Male, entitled – a modern humanist intelligence – Chaudhuri doesn’t shy away from inhabiting his own point of view, including when it makes him appear slightly hapless in the face of the globalised, capital-driven world. “It has a kind of inadvertent comedy, which I didn’t want to leave out,” he admitted in our conversation, “as long as you resist something you’re connected to, there’s something kind of comical about that.”

Though its humourous moments leaven Calcutta’s ponderous aspects, it’s the flashes of insight about shifting culture – those glimpses of the new in the cracks of the old – that really bring the book to life. Unlike countless recent titles about the “new India”, Chaudhuri doesn’t exactly tackle the surging unknowns head-on; but in delineating their boundaries with modernity, he comes up with some fruitful ways of looking at “this weird enchantment – the fairy-tale stillness of a globalisation that has no real resources.” Globalisation, Chaudhuri said, “has provincialised great territories, great parts of the world.” He sets off this Anglophone, homogenizing phenomenon against the backdrop of bhadralok culture, which he argues was both provincial (in its linguistic and cultural Bengaliness) and cosmopolitan (in its liberal harvesting of international art and writing).

While mourning the passing on of the “perennially new” people of modern Calcutta in a eulogy with deliberately mixed allusions (“they were like some kind of new genre that had emerged in the late nineteenth or early twentieth century – like a film by Ghatak or Renoir, or a painting by Paul Klee, or a poem by Jibanananda Das, or a song by Cole Porter or Himangshu Dutta”), Chaudhuri also recognises “the difficulty of evolving as an artist, of reigning yourself to the fact that the styles and visions most previous to you have lost their place and urgency, of accepting that what you once thought was uninteresting is now full of possibility!” He goes on to note, “This is a little parable about cities and genres; how, while some of them lose their imaginative centrality, others take their place.”

Calcutta’s place in the genre of city writing is yoked to Chaudhuri’s unhurried temperament and walking pace – the street is “a place to loiter in”. As cities change, the flâneur finds himself loitering within the commerce-driven, flattened landscape of a mall. Meanwhile, for the intellectual elite and the bourgeoisie at least, the contours of urban experience are defined less by physical proximity or historic roots than by the identities and friendships that are lived online. Though Chaudhuri explained that “I wanted to be moving constantly between one thing and another… let’s say from an object, like a French window, to my being there, to the history of the city,” his intellect ambles meditatively between these things. As cities spawn new genres that focus, package, then flit away from their subject – that are media-rich but often hit-and-run in their engagement – there seems to be less time for a book like Calcutta. This only makes it an all the more special reminder of the power of unhurried writing and the self-renewing potential of returning again and again to a subject one thinks one knows.

Chaudhuri quotes Elizabeth Bishop’s “Questions of Travel” in his epigraph, and in doing so unconsciously echoes Tagore’s My Reminiscences from a hundred years ago: “So in the streets of Calcutta I sometimes imagine myself a foreigner, and only then do I discover how much is to be seen, which is lost so long as its full value in attention is not paid. It is the hunger to really see which drives people to travel to strange places.” And also, which sometimes brings them home again.