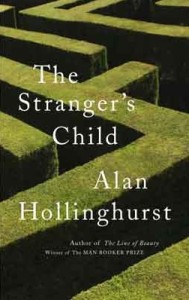 The opening image would enchant any serious reader: a 16-year-old girl reading poetry in a hammock in an English garden. Her mind wanders from Tennyson to the impending visit of Cecil Valance, a poet and young nobleman who is her brother’s friend and, though she doesn’t know it, his lover.

Like his previous four, Alan Hollinghurst’s new novel wears its gay perspective on its sleeve. Unlike the earlier books, which were set during the last 30 years (and include Man Booker-winner The Line of Beauty), the five chapters of The Stranger’s Child take place in 1913, 1926, 1967, 1979-80 and 2008. The events revolve around a poem written by Valance during his visit. As the original circumstances of the visit fade from memory, future generations attempt to breathe life back into history, while also reinterpreting it.

Throughout this remembrance of things past, Hollinghurst’s strength is his ability to tease out the thoughts behind every character’s smallest actions. His deliciously natural, unstereotyped portraits distinguish this novel of manners. The other distinction is his trademark, unapologetic inclusion of gay characters and encounters. Sometimes the book reads like a thought-experiment on being gay in the first half of the century.

While Hollinghurst subtly charts society’s shifting perception of homosexuality, he falters towards the end. In each successive chapter, characters become thinner and less capable of giving the novel the close it deserves. The tangential last chapter implies that history is unknowable, but these pages aren’t nearly as satisfying to read. And while the World Wars echo through the plot, Hollinghurst is less successful at depicting their effect than AS Byatt in her similar The Children’s Book. Hollinghurst is a twentieth century lit scholar, so this period novel isn’t surprising – perhaps even overdue. Still, it’s a pity the story fizzles out as it nears our current century.