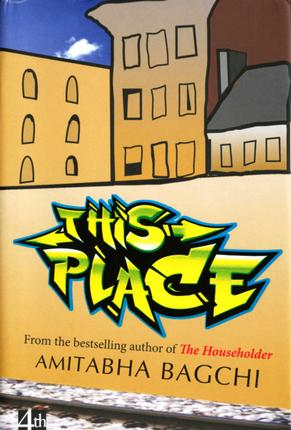 After being suspended from his government job, Naresh Kumar, the title character in Amitabha Bagchi’s previous book, The Householder (Fourth Estate, 2012), finds himself a stranger in his own house. He waits desperately for the evening, “The time after which this house, which he had plotted and pleaded and sweated to have allotted to him, this house where every single object, durable and consumable, had been bought with the money he had earned, this house where every single person ate because he worked, this house that didn’t seem to possess the generosity to keep him during the day, this same house would open up and welcome him back. Shamelessly ignoring the fact that he had not left all day, the house would readmit him into its rigid routine.”

“This house” is the particular locus of Bagchi’s second novel, but the question of how people make and unmake – and are made and unmade by – place is present in all three of his books, which have sometimes been slotted into categories circumscribed by setting: the campus novel (Above Average, HarperCollins, 2007), the Delhi novel (The Householder), and the immigrant novel (This Place).

This Place takes in the larger reality of an entire city, Baltimore, but focusses its plot and action around one stretch of 26th Street, where its small cast of characters live. Compared to Naresh – a man mired in his relationships with the world, whose form of rebellion (a contemplated affair with his secretary) is almost as tawdry a cliché as the confines of his mundane middle-class life – the main character in This Place, Jeevan, is a cipher. Formerly a taxi driver, Jeevan has been in America for a long time but never quite lived there. He looks at other immigrants, settling into their new lives and sometimes tries “to want the things that they wanted”. Early in the book, he walks into his house and “for a moment it felt like he was visiting himself, Jeevan Sharma, an old acquaintance. He felt a twinge of curiosity, as if he had known this Jeevan Sharma when they were both much younger and was eager to see what his life was like now and how he kept his house.” In a sense, This Place is the story of how he discovers himself through the people around him on 26th street.

On one level, Jeevan already knows that this closeness to his neighbours goes beyond proximity and has a premonition that “he could stay in this place for a long time”. Besides Jeevan, on the four houses on 26th street there’s Miss Lucy, an elderly black lady who plays the organ and makes him pancakes; Henry, who never missed a day of work before he retired, and whose idol is Cal Ripken, Jr (the Baltimore baseball player who holds a record for consecutive games played); and the younger, more transient characters Matthew and Kay, a couple with marital problems who have just moved in. Jeevan’s Pakistani boss, Shabbir, owns three of the four houses and holds court at his Food Point restaurant nearby. As the diversity of the characters implies, this is not the “immigrant fiction” of the ghetto, but the story of a few people at a crossroads, unrelated by blood, yet functioning like family.

Bagchi is also especially interested in characters in transitional places, whether it’s The Householder’s government flats (where “there was always a near or distant future looming ahead… they would have to return this house to the government, ‘surrender it’…”) or the IIT-Delhi campus in Above Average. In This Place, Baltimore itself is in upheaval at the end of the 1990s. After years of neglect, the city administration, with the backing of Johns Hopkins University, is taking over 26th street for “urban renewal”. Bagchi casts “The City” as a larger entity, imposing its own agency upon its inhabitants. “The City has exercised its rights,” one of its representatives tells Miss Lucy. “The City has the power, they are using their power,” Shabbir tells Jeevan, “And we are all going to benefit.”

Larger economic shifts may be driving the City, but it is Shabbir, one of its newer residents, who celebrates and implements its decisions. “This hell will become heaven, Jeevan bhai,” Shabbir says, anticipating how highly he will be compensated for his property, “and we will be landlords in heaven.” Attachment to the old buildings and old neighbours is foolish, Shabbir explains to his son, who wants to help save the houses by registering them as historical landmarks. “What history is there in this two-hundred-year-old country anyway? In Lahore, every mohalla had a six-hundred-year-old-building just sitting there with birds shitting all over it.” He takes Miss Lucy to a new house and she protests that “I didn’t birth two children here… My husband didn’t fall down dead here.” He replies, “Your final home is in the sky with your god. Till then, if living here is your destiny, you must accept it.”

Bagchi is a writer who flirts with stereotypes, complicating them through his characters’ actions. While Shabbir’s motivations are primarily pecuniary, this “greedy man’s ruthless acquisitiveness” is tempered by “a version of honesty”. Jeevan is Shabbir’s accountant and moral compass — accepting his shady business dealings while drawing a line when the landlord tries to keep his ownership of Miss Lucy’s house a secret and to profit from it. Jeevan may be putting down roots in shifting ground, but it’s precisely this churning that allows him to realise the extent of his attachment to other people. Another character reflects that “This time it wasn’t he who would leave but the place itself.” The threat of a reverse type of displacement compels Jeevan.

Bagchi also excels at monologues and dialogue, and he often uses both to stylistically reflect the book’s themes. Henry’s uninterrupted retelling of his past in an early soliloquy mirrors the stasis (soon to be shattered) of the city he has known for “seventy some” years. During a dinner conversation between Jeevan and Shabbir at a Chinese eatery, intrusions by the owner and delivery boy and the random dialogue of fellow diners captures the fragmentary, cheek-by- jowl nature of urban life. Readers who liked the compressed style of Bagchi’s previous books may find This Place disappointing: the writing feels sparser than the college slang-filled dialogue and almost fetishistic descriptions of Delhi in Above Average, or the thick descriptions of babudom and domestic life in The Householder. In some of This Place, Bagchi uses the lighter touch of short story writing, inviting sustained intimacy through a description or a dialogue, but dancing away from overly long digressions in favour of punch and concision.

Bagchi wrote This Place before he wrote The Householder, but the subtle stylistic difference seems more like an authorial choice than the result of a lack of experience. Bagchi has described in a note how he wanted This Place to echo the emptiness of the paintings of Edward Hopper, “landscapes marked by human habitation but empty of human figures,” that imply an understanding of “the essential transience of human life and [a] hope for permanence” on what humans build. At the end of each chapter, Bagchi appends a coda that riffs on a word or a theme from the preceding pages through a conversation between anonymous strangers or a description of the cityscape. Some are oblique, such as a conversation about homemade versus box pancakes overheard on a bus. Others are heavyhanded; one chapter ends in a vision of decrepit, bullet-riddled walls and then an assertion, almost in the voice of the City: “What do we do with this place? … Perhaps the best way is to start from scratch. Demolish them, each last one of them. Pulverize them. We need to start afresh. A clean slate. We won’t make the same mistakes this time.”

These codas, and Bagchi’s excursions into characters’ back-stories and inner lives, all accumulate to create an excess of incompleteness, an almost claustrophobic lightness. He approximates the surface emptiness and sudden intimacy of urban American life itself. Space – a limitless resource to be conquered, administered and turned to profit – supersedes place. When Kamran and Kay dissect the significance of the words “our past” in the criteria for registering a historic landmark, Kamran says, ‘“I don’t think that their ‘our’ means us,’ … ‘It’s like, you know, a bigger ‘our’.” “Yeah,” said Kay. “That’s what’s funny. It’s an “our” that includes us, but it’s so big that it doesn’t mean us.”’

These characters try, and fail, to resist the erosion of place – “This place will not be here in a few months’ time,” says Jeevan – but find what refuge they can in planning a future together — “And all of you will be in all the places you’ll be in,” answers Matthew. The idea echoes Walt Whitman’s “A Song For Occupations,” (Leaves of Grass, Walt Whitman / James R Osgood and Company / 1881-82), which encourages “You workwomen and workmen of these States”, who build the nations’ cities, to make some meaning too, out of each other’s company:

Will you seek afar off? you surely come back at last,
In things best known to you finding the best, or as good as the best,
In folks nearest to you finding the sweetest, strongest, lovingest,
Happiness, knowledge, not in another place but this place, not for another hour but this hour,
Man in the first you see or touch, always in friend, brother, nighest neighbor…

Originally published in the March-April 2014 issue of Biblio.

Read as a PDF here: