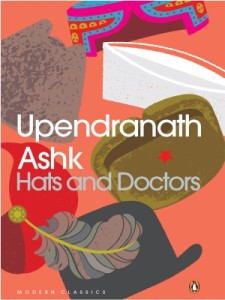 Daisy Rockwell’s translation of Hindi-Urdu writer Upendranath Ashk’s short stories is more of a teaser than a complete introduction to the Jalandhar-born author. Rockwell, who also edited the collection, had the fortune to meet Ashk a year before he died in Allahabad in 1996. She admiringly characterises him as idiosyncratic and hostile, an outlier in a field that was already being marginalised.

Rockwell is working on a translation of Ashk’s 1947 novel Girti Divarein, a major work, and she implies in the introduction that Hats and Doctors is a somewhat random assortment of stories – some of them in debatably “final” form as the author used multiple drafts and on occasion even supplied his own translations. Through colourful anecdote, she also tells us that Ashk himself tasked her with the translation, if in a somewhat oblique manner.

This obliqueness is a feature of the stories here as well, and Ashk’s subtle satire comes through more clearly in some than others. In some, it is the protagonist or narrator’s discomfort that rises to a near-fevered pitch: a newly promoted bureaucrat in “Brown Sahibs” and the hypochondriac of “Hats and Doctors”. Other memorable characters include an irritable train passenger in “The Cartoon Hero” and a miserly yet bombastic family of tourists in Kashmir in “The Dal Eaters”. Though relatively restrained, several of the stories approach the grotesque: “Dying and Dying”, set in another train compartment, juxtaposes the memory of a nuptial night with an intimation of mortality; “Mr. Ghatpande” captures life and death in a tuberculosis ward (Ashk himself spent time in one). Ashk’s concern with writing about the unfortunate members of society comes through in many stories: “The Aubergine Plant” underscores the worth of one man’s life compared to another’s.

The reader will find something to like in the 16 stories here. Rockwell has previously written a critical biography of Ashk, and the casual reader may wish for more insight into his life and philosophy than is given in her fun but slightly flippant introduction to Hats and Doctors. The stories too may have benefited from a more introductory context. Still, if the book leaves one wanting a bit more, there’s the assurance that more is on the way: Rockwell is hard at work on Falling Walls (no publication date yet though); meanwhile she hopes “that some of these stories will induce a few readers… to turn their feet towards a Hindi bookshop one day.”