New Delhi gives way to the old city as you cross the railway line northeast of Connaught Place. A little before Shahjahanabad proper, however, the area between Ferozeshah Kotla, Gandhi Market and ITO already feels more like Sheher than Nai Dilli. This is where the balance of traffic switches from cars to cycle-rickshaws and pedestrians. Along Mirdard Lane, near Mata Sundri Road, there are innumerable barber shops and a masjid and kabristan called Takia Kale Khan. Mata Sundri gurudwara isn’t far, and the Aiwan-e-Ghalib auditorium is close at hand as well.

Watch for a little stretch of food stalls, with people and flies buzzing away with abandon, and meaty aromas you won’t find in your local adda. A number of stalls sell fried, griddled and flamed foodstuffs in the evening. In between are a few butcher shops selling poultry, mutton, and goat heads (the animals themselves are tied up outside the DDA flats just behind the stalls). The faint-hearted needn’t quail, however – the atmosphere of butchery is far tamer than the back-lanes of INA market on any given day. And the regular patrons make for a pretty cosmopolitan mix. In the evenings, you’ll find autowalas in their gray uniforms, neighbourhood families, children from a nearby madrassa in their dun-coloured kurta-pyjamas and a few hopeful cats and dogs.

The first food stall sells fried chicken: a golden ring of battered birds laid out around a giant kadhai. Next are stalls selling tandoori chicken, Changezi chicken, biryani, korma, fish tikkas and other kababs. The last stall, just before Maharaja Ranjeet Singh Marg, is an unmarked green-tiled kitchen with a photo of the Taj Mahal as its only ornamentation. The establishment is known locally as “Mumtaz tikkewala” and it serves meat seekhs and tikkas (Rs 3 each). The tikkas are small and soft little morsels, properly burnt around the edges. The seekhs are slender rolls of granular meat, flecked with little juicy bits of garlic. These are served with roomali rotis (Rs 2), a wedge of lime, a mass of onions and a salty, tangy chutney made of “khattai” (tamarind and other spices) and yoghurt. The stall’s speciality is a seekh-tikka combination roomali roll. The adjacent general store will supply you with a cold drink to wash down the grease and spice. 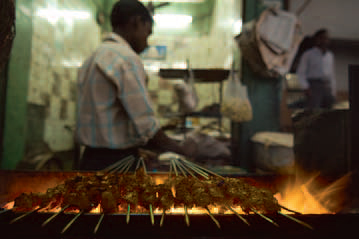 Top off these cheap thrills with an even cheaper one: a piping hot, juicy jalebi (Rs 1 each), from the cart across the road. An andawala, fruit-vendors and chaiwalas are also installed in the area. Best of all, these local delights are a mere two-minute drive from CP.

From Barakhamba Road, take Maharaja Ranjeet Singh Marg. Proceed over the flyover and take the first right at the signal (at Mother Dairy). Follow your nose to the stalls at your right. Daily 6.30- 11pm. Metro Barakhamba Road